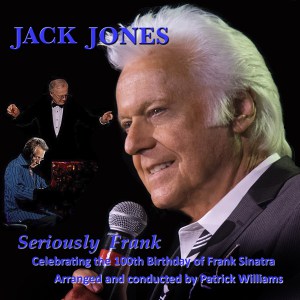 Lounge jazz/easy listening singer Jack Jones owes his career to Frank Sinatra. You see when he was at school one of his classmates was an awkward little girl called Nancy and one day the headmistress invited Nancy’s dad to come and sing in assembly. The little girl was Nancy Sinatra and when young Jack heard ‘ol blue eyes he knew right away that the only thing he wanted to be was a singer. Jones, of course, went on to enjoy a garlanded career himself and now, aged 78, he feels the time’s right to offer his tribute to the man who was his original inspiration.

For ‘Seriously Frank’, Jones has recorded 13 songs associated with Sinatra and sensibly he’s avoided too many Sinatra chestnuts. There are a few – ‘The Lady Is A Tramp’, ‘For Once In My Life’ and ‘That’s Life’ – but by and large the selected numbers come from the lesser known gems in the Sinatra canon. Best of the bunch is the wonderful weepie ‘I Guess I’ll Hang My Tears Out To Dry’ while Jack also tackles another bleak Sinatra moment, ‘Only The Lonely’. On both, it’s evident that Jones’ voice isn’t quite what it was but the odd vocal aberration only adds to the air of melancholy and world weariness.

Amongst the other cuts are versions of ‘It Was A Very Good Year’, ‘Please Be Kind’, ‘When The World Was Young’ and ‘Teach Me Tonight’. Throughout, Jones is backed by a full orchestra and though they don’t quite swing in the same way as the bands did in the days of Nelson Riddle and Gordon Jenkins, it’s refreshing to hear real musicians on real instruments and they do much to hide the obvious deficiencies in Jones’ vocals.

That said this is a heartfelt tribute to the “Voice of the Century” summed up in the one song not in Sinatra’s own catalogue…’The Singer’. Originally composed by Vincent Falcone and Joe Cocuzzo, as a Sinatra tribute, Jones clearly feels that the song’s lyrics fully epitomize the person he knew, admired and was inspired by.