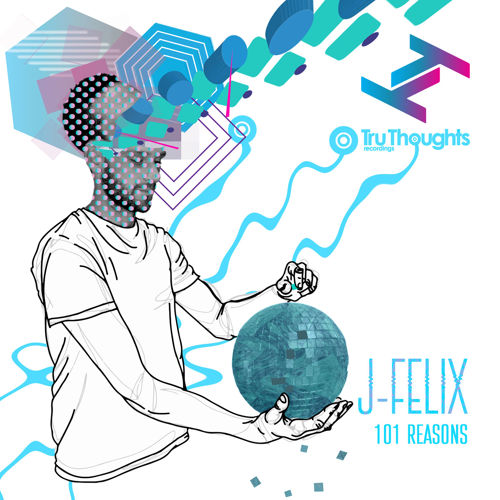 J-Felix is the alter ego of Bristol’s Joe F Newman. Growing up he was drawn into the drum n bass and dubwise scene that his hometown was famous for. Investigating further he began to explore the original tunes that many of the local spinners, producers and artists were sampling; that was his entry to the world of soul and funk. He learned guitar and played with a number of bands – his most high profile gig, maybe, being in Alice Russell’s group. Relocating to Brighton, he started to make his own music – building on his roots and experimenting with the possibilities of electronic music-making.

Now simply known as J-Felix, he’s released his solo début. The ‘101 Reasons’ title comes from his favourite BPM pattern and, he says, from his outlook on life which is based on keeping a positive vibe and having plenty of reason to do just that!

That said, the 15 tracker is a throw back to the days of electro soul and funk with the signature tune being ‘Late Night SOS’ –a homage to the sounds of bands like The SOS Band, Cameo and the Barkays. There’s a whiff of Prince about it too. Fans of that particular sound will love it but over 15 tracks the grinding electronic sound become a little wearisome.

The LP’s best tunes are those that offer something a tad different…. especially the ones that feature female singer, Abi Flynn. She’s up there on two cuts – ‘Patience’ and ‘Time’ and both have good, tight, beats and are the best “proper” soul tunes on the album. Singer Sophie Paul is another guest and she brings a touch of Baduism to ‘Show ‘Em How It’s Done’…again a welcome break from the electronic onslaught.