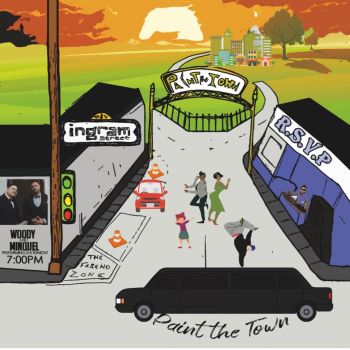 Those two cuts are tastefully embed in the duo’s new album, ‘Paint The Town’ – their second full LP after 2015’s ‘Escapism’ and the signature sound of the 9 tracker doesn’t stray too far from the harmonic sound of those two singles. There are plenty more similar cute ballads like ‘Beautiful Possibility’ with the semi-acoustic ‘Can’t Get You Out Of My Mind’ being the best. The other ballads number ‘Hold On’, Keepin’ It Special’ (another Ron Tyson song) and the ponderous ‘More Than Gold’.

Those slowies are balanced nicely by the up-tempo numbers. The most catchy of ‘em is the album’s title track. This ‘Paint The Town’ is a classic Chicago steppers type tune – guaranteed to get feet tapping and heads nodding with it’s tight beats while harmonies are ultra-sweet. The boys themselves will be the first to admit that it’s a “good time” song… nothing deep or meaningful. Indeed, that’s the thing about the album. It’s not meant to provoke – just to make you feel a little better in these trying times. The album opener is a good example. ‘RSVP’ is an invitation to enjoy the music… “an invitation to a musical situation that will exceed your expectation”. Yes, hardly Shakespeare but nothing wrong with simple, uncluttered enjoyment and there’s plenty of that here. Album production, by the way, is shared by Preston Glass and Brandon “B Jazz” Scott – a long-time collaborator of Eric Roberson.