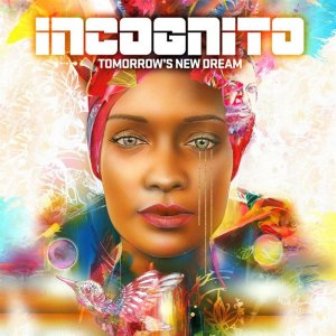 ‘Tomorrow’s New Dream’ is, I think, Incognito’s 18th studio album and as soon as the needle hits the groove on the busy, bustling opener, ‘Haze Of Summer’ you know that age and custom has not staled Bluey’s appetite to craft top class modern soul. The music on this new 14 tracker is different to 1981’s ‘Jazz Funk’ but it’s delivered with the same passion, the same attention to detail and the same kaleidoscopic take on modern black music genres.

Of course, over forty years, the Bluey/Incognito sound has evolved – most notably in the inclusion of more vocals and on ‘Tomorrow’s New Dream’ Mr M has brought in a stellar team of singers to help him deliver. The singer you always associate with the band is the incomparable Maysa Leak. She features on two songs here… the bright and busy ‘All For You’ and the gorgeous ‘For The Love Of You’ where she duets with the ever-dependable Phil Perry. By the way, the songs aren’t (respectively) the Stevie Wonder or Isley Brothers’ songs. They’re new and by now you should be familiar with the Leak/Perry duet. It’s rightly been all over the soul airwaves in the last few weeks and its class sets the album’s benchmark.

Amongst the other guest vocalists are Mario Biondi and Take 6. Signore Biondi takes lead on ‘No Show’, an atmospheric piece that has hints of the best of Jon Lucien. Take 6 bring their harmony skills to ‘The Weather Report’ which cleverly likens the ups and downs of a relationship to swings in the weather.

The other guest vocalists are Joy Rose, James Berkeley, Cherri V, Roberta Gentile, Imaani and Vanessa Haynes who fronts another album highlight – the building ‘Still The One’ on which the (uncredited, on my copy) harmonica is a delight.

The album also offers two instrumentals… the flute-led, complex ‘Saturday Sirens’ and the brash closer that is ‘Say What’s On Your Mind’ on which Bluey allows the band to stretch and shine… just like he did back in 1981… “plus ça change”.