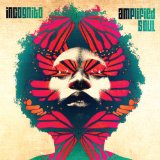 Hard to believe but ‘Amplified Soul’ is Incognito’s 16th studio album, and, you know, their music sounds as fresh, as vital and as soulful as ever. After 35 years in this crazy business, Bluey can still deliver the goods and, ever humble, even he can’t give and easy answer as to why the music he crafts is still consistently excellent. I can venture a few reasons. Mr Maunick is passionate about music; it’s what he does, and like the great Michelin-starred chefs who transfer their passions onto the plates, Bluey’s regard for quality-crafted music shines through on everything he works on. Then, of course, he has an encyclopaedic knowledge of and respect for soul, jazz and funk’s rich heritage and that experience informs his art. Thirdly – and ensuring the Incognito sound is always fresh- his band is ever-evolving, albeit gradually. On ‘Amplified Soul’ he uses regular vocalists Tony Momrelle and Vanessa Haynes but brings in newcomers Katie Leonie and Chiara Hunter; then for some extra vocal variety he uses guests Carleen Anderson and Deborah Anderson. Instrumentally the main players are Incognito veterans but to keep the palette fresh Bluey brings in people like Nick Van Gelder (drums) and Joaoa Caetano (percussion). The result is an album that is instantly recognizable as Incognito but one that sounds contemporary, fresh and intriguing.

Take a listen to ‘I Couldn’t Love You More’ to hear what I’m going on about. It’s an instant Incognito classic – deep groove, trademark punchy brass and familiar vocal sound from Vanessa Haynes – but the changes are sweet and the structure complex showing, maybe, a more mature Incognito sound. Similarly with the album’s only cover – an Incognito look at Atlantic Starr’s ‘Silver Shadow’. Yep, an inspired choice… no hackneyed chestnuts for Bluey, this new version is more organic than the 80s programmed original while Haynes’ vocal brings a new maturity to the song. Other highlights? Well, any of ‘Amplified Soul’s generous 16 tracks would stand out on any other album, but let me point you to just a few. For those who like to dance there’s plenty of controlled energy for the feet on ‘Hats (Make Me Wanna Holler)’, ‘Never Known A Love Like This Before’, the slinky ‘Hands Up If You Wanna Be Loved’ and the Latin-tinged ‘Something ‘Bout July’ (great Tony Momrelle vocal here, by the way); the quiet store brigade will love the dreamy, jazzy ‘Deeper Still’ – which features Chiara Hunter. Then there’s ‘Amplify Your Soul’ itself. The set’s opener is darker and broodier than anything Incognito have tackled before and its mysteries are further explored in the part 2 instrumental workout. The album features a second instrumental on which Bluey allows the band to really stretch. That tune is ‘Wind Sorceress’ – in name and in sound a wonderful homage to the Mizell Brothers/Donald Byrd sound.

35 years in and 16 long players down the line Incogntio have delivered again. Bluey has described the album as “a labour of love”... it shows. Find out more via our interview with Bluey in our Interview section.