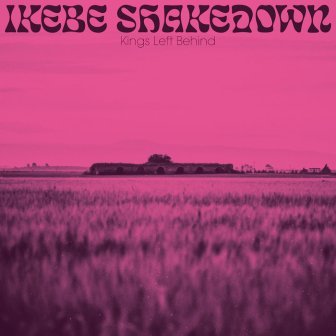 Ikebe Shakedown is a seven piece instrumental combo that came together in Brooklyn in 2008. They named themselves after a classic Nigerian long player and describe their music as “afro-soul”. They debuted in 2009 with the EP ‘Hard Steppin’ which was followed by a full eponymous LP. Two more albums offering their signature brass-filled sound got Ikebe Shakedown work with people like Sharon Jones and Charles Bradley. And therein is another clue to the outfit’s sound – they peddle that now very fashionable, tough and rough, retro brassy soul – though in their case they throw in Afro flavours, a touch of the cinematic and an undercurrent of psychedelic.

Hear all those signature flavours on this set’s opener… ‘Not Another Drop’. Funky, Afro percussion, psychedelic guitar and riffing brass – it’s all in the mix. The album’s title track offers more of the same – to recommend it I’d say it reminds me more of the classic Stax sound than that of Daptone. More big, old school flavours on ‘Unqualified’ – a big, big tune with a real catchy brass figure, authentic Hammond and stomping Northern soul beats. It also boasts that rough, unpolished 60s indie soul sound. I’ll wager if you played this one out at a Northern soul event and claimed it as a long lost backing track from a label like Mirwood, Loma or Shrine none of the brothers (or sisters) would bat an eyelid… they’d just get on with the back flips!

Throw in a couple of more melancholic cuts – ‘The Witness’ for instance – and you have an intriguing, imaginative collection. In truth, ‘Kings Left Behind’ is never going to set the soul world alight – but if you like your sounds rough hewn and authentic, you could do worse than investigate!