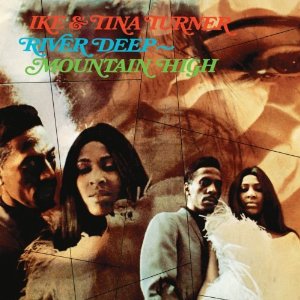 Enough’s been written about Ike & Tina Turner’s monumental single ‘River Deep – Mountain High’ to make any words from me redundant. Just to say that the song defined not just theirs but also Phil Spector’s career. It was recorded in 1966 when the Turners and Spector were in the doldrums. The hits had dried up for the duo while the meister producer was reeling from the British beat invasion. Spector decided to hit back by using what he knew was an awesome instrument –Tina Turner’s voice and wrapping it in everything his famed Wrecking Crew could devise. Everyone knows the rest of the story….’River Deep – Mountain High’ became a worldwide smash and an instant classic. To this day it’s still a radio staple and regularly cited as one of the greatest pop records of any era. It is all those things of course, but its impact, status and familiarity meant and still means that the rest of the album from which it came is criminally overlooked.

Now with this reissue, Hip-O Select allow us to enjoy the album in its entirety and though ‘River Deep –Mountain High’ is all the things we’ve just described , there are plenty more cuts that rival it ….and – dare I say (from a soul perspective at least) – there’s one track that betters it. That one is a stunning version of Holland-Dozier-Holland’s ‘A Love Like Yours (Don’t Come Knocking Every Day)’. The best-known version is, of course, by Martha and the Vandellas; but here Tina Turner transforms what was essentially a pleasing pop-soul ditty into a deep soul tour de force and for once Spector’s over blown theatricals are just right …check out that short symphonic opening.

Nothing else on the 12 tracker matches its majesty – but some come close, notably reworking of earlier hits by the Turners – ‘A Fool In Love’, ‘It’s Gonna Work Out Fine’ and ‘I Idolize You’. There’s even a remarkable version of the Drifters’ ‘Save The Last Dance For Me’ and Steve Alaimo’s ‘Every Day I Have To Cry’ along with a great song from Ellie Greenwich and Jeff Barry (‘Hold On Baby’) and Spector’s own ‘I’ll Never Need More Than This’. Even without ‘River Deep –Mountain High’ this would be an exceptional album. After its release Ike and Tina and Phil Spector took very different career and life trajectories but neither party ever created anything vaguely approaching this again.