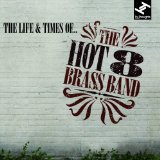 New Orleans’ Hot 8 Brass Band made their recording debut in 2007 with the acclaimed ‘Rock With The Hot 8’. From that set a lugubrious but inspired reading of ‘Sexual Healing’ became an instant classic and the outfit found themselves in huge demand throughout the Big Easy. Their mixing of the traditional marching sound with contemporary soul and even R&B and hip-hop flavours has won them a large following and those fans will be delighted with this new 9 tracker that offers more of their joyous and unique sound.

The album has been heralded with a single – a cover of the Specials’ ‘Ghost Town’ and the track stands out on the LP – chiefly through its familiarity. It’s a joyous little romp – though it manages to retain the sinister implications of the original… and that odd mixing of laid back musical joie-de-vivre and darker murmurings are evident through the long player – no more so than on ‘Can’t Hide From The Truth’. The lyric (semi-rapped) that runs over the rumbling brass track is an open message to the New Orleans Police Dept. who killed band member, Joseph Williams in controversial circumstances. Despite that scenario, though, the tune is strangely uplifting. The same goes for the 8 minutes long ‘Let Me Do My Thing’. It’s a joyous sound but beneath it all there’s a serious message as sometime band member Tyrus Chapman relates the story of his past experiences with heroin. It’s an infectious track and comes complete with raps from Big Al Huntley and Shamarr Allen

Other high spots include the big, brash yet poignant opener – ‘Streamin’ Blues’ … poignant because it was written by the late Joseph Williams; ‘Bingo Bango’ (a Basement Jaxx tune) – almost in house territory; and a rolling ‘Fine Tuner’. Band leader and tuba player, Bennie Pete says the logic behind the album is “to bury the dead and let their spirits soar… to celebrate our city and the lives that our band mates have lived”. Patently, he and his confreres have succeeded.