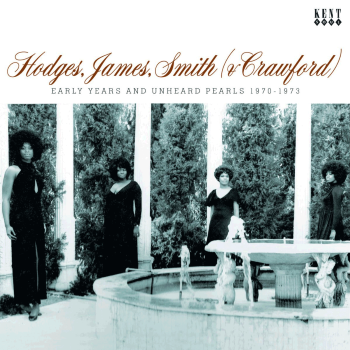 I’m guessing that only hardened soul connoisseurs will have heard of 70s female group Hodges, James and Smith – who sometimes recorded with a fourth member, “Crawford” and, to make things even more confusing they also recorded as Love N Stuff. The group came together under the aegis of sometime Motown man Mickey Stevenson when he was working out of Los Angeles. Jessica Smith worked in his office, and it seems that Stevenson heard her sing and asked if she’d thought of pro-work. Smith had in fact worked with school  vocal  groups and she quickly contacted old friends Pat Hodges and Denita James to form a new group. The trio were impressed by Stevenson’s reputation and hoped he could work  some of his old Motown magic on them.

The trio recorded  a single – ‘Somewhere A Valley’/ ‘Ain’t That Right’ – as Hodges, James and Smith for the People label but in a busy marketplace, it meant little. Maybe that name was a little cumbersome, so  for their next release they became Love N Stuff but their single ‘Right On Brother, Brother Right On’/’Let It Out Let It In’ (Pride 1971) also failed to make real impact. Stevenson then decided to  beef up the group’s sound with the addition of a fourth singer – someone he remembered from his Motown days – Carolyn Crawford (you’ll know and love her Motown classic ‘My Smile Is Just A Frown Turned Upside Down’). Now renamed Hodges, James, Smith and Crawford, the girls released two more singles before Ms Crawford left to return to solo work.  The remaining trio continued to record and work sessions but that stardom they’d hoped for eluded them.

All the music from the various line ups has just been released in this new  Ace/Kent collection and it’s a wonderful tribute to a group that (as the music testifies) should have been bigger. Sonically the basic template is classic 70s Motown/Invictus – sort of The Supremes meet the Honey Cone but with one big difference. The vocals are tougher, funkier, meatier and (dare I say it?) more soulful – maybe a reason why the girls failed to ignite the charts. Maybe they were too “real”?

The 21 tracker offers plenty of highlights like the jaunty ‘What Made You Think’, the sweet ‘Let’s Pick Up The Pieces’, ‘(I Wanna Be A) Hang-Up To You’ which owes a little to ‘Baby I Need Your Loving’ (Stevenson was a Motown man, remember) and ‘Write Me A Letter’ which is witness to the soulful power the girls could whip up. It’s all great stuff and with writing/production credits numbering Leon Ware, Ronnie McNeir, Clarence Paul and, of course, Stevenson himself, you know we’re talking quality.