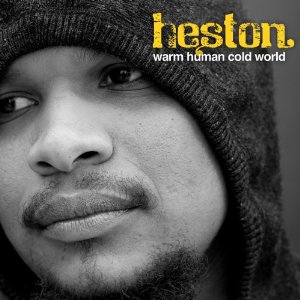 Heston hails from Dominica but works out of Atlanta where he’s part of that city’s thriving soul scene. ‘Warm Human Cold World’ is his second album and continues where his debut set, ‘Storyteller’, ended. That’s to say – like its predecessor – this new, concise 10 tracker is a very personal record with a real intimacy, indeed, a warmth that the LP’s title heralds. Here, the song cycle deals with personal relationships and, helpfully, Heston reveals in the sleeve notes how and why each song came about but though the songs are “his” he makes it easy for us all to relate to his tales of finding and losing love – and, most importantly, of finding huge joy in that most intangible of human emotions.

Musically the best reference point might well be Leon Ware. The soundscape is generally laid back, hypotonic and soothing – a “musical massage” if you would. The first three songs almost meld into each other before we’re met by a superb ballad – ‘You’. Here Heston comes on like a mix of Maxwell’s ‘Urban Hang Suite ‘and Smokey’s ‘Quiet Storm’ … and at seven minutes it’s not too long! ‘In These Arms’ and ‘Lonely In My Room’ have hints of Maxwell’s balladeering too –certainly no bad thing.

The album also boasts two fine upbeat moments – the jaunty ‘Right Here’ and the uplifting ‘Greatest Lover’. The former has an almost Caribbean swagger to it and is guaranteed to bring sunshine into the greyest winter day while the latter takes the accolade as the set’s outstanding cut. It’s a fabulously bright and brassy affirmation of the joy that a fulfilling relationship can bring. In his notes Heston says the song is about a lady who “will always and forever be near and dear to my heart” and you can hear his commitment throughout the song’s five minutes. It’s one of those few magical songs where the actual sound matches the intended sentiment and it makes a great ending to a very good, proper “modern” soul album.