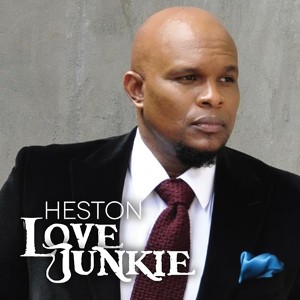 Though born in Dominica, Heston now lives and works in Atlanta where he’s very much part of that city’s vibrant neo/nu soul scene. ‘Love Junkie’ is his third full album and to help him deliver he’s drafted in some of his fellow Atlantean soul mates – notably Brandon Thomas, Khari Simmons and Chantae Cann who duets with him on one of the long player’s highlights… the gentle and insinuating ballad that is ‘Love Space’. For those who like their “down” moments there are plenty more ballads –some much more down than others. I’m thinking here of the oddly titled ‘Catfish’… funerary and depressing, and the acoustic ‘My Best Friend’. Both have that self-conscious intensity that provides neo/nu soul critics with plenty of ammunition. Much better in the ballad department is the more focused ‘My Only Question’ – shades of prime time Maxwell.

There’s a whiff of Maxwell about the title cut too… a great mid-tempo moment that displays all the best traits of neo/nu soul. ‘Resign To U’ is a deal more up-tempo. Crisp and tight, modern soul dancers could do worse than check it out. ‘To The Sky’ is a tad slower but it could still get heads nodding and feet tapping – albeit sedately.

Elsewhere, there’s a Latin garnish to ‘Destiny’ but some might argue that the rap from Abyss hinders matters while the Lenny Kravitz flavoured ‘Our Father’ and ‘Come Away With Me’ tip nods to the singer’s Caribbean roots.

Like Heston’s previous efforts, ‘Love Junkie’ is a bit of a mixed bag. It’s hugely intense in places but those self-absorbed moments are balanced by some delightful “up” cuts and you can find out more @ www.hestonmusic.com