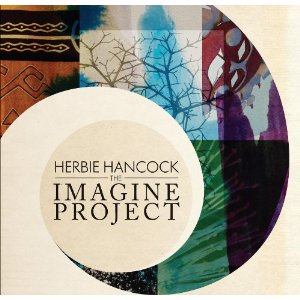 Herbie Hancock’s recent mantra that “music truly is the universal language” is made real on this new album – a huge, mixed genre affair featuring (amongst others) Pink, Jeff Beck, India. Arie, Oumou Sangare, Susan Tedeschi, John Legend, Wayne Shorter, Chaka Khan and the Chieftains. Hancock’s belief in the power of music’s universality to foster world harmony is reflected in the songs he’s chosen for this team to work on – Bob Dylan’s ‘The Times They Are A Changing’, The Beatles’ ‘Tomorrow Never Knows’, Peter Gabriel’s ‘Don’t Give Up’ and so on. Hancock makes it easy to understand his concept by placing John Lennon’s ‘Imagine’ as the opening track. The message is perfect for his crusade and the treatment sums up what, musically, he’s about. It begins as a soul duet between John Legend and Pink; then the rhythm become funkier, till finally Oumou Sangare transforms it into an African lament. The least accessible cut is the closer – ‘The Song Goes On’. Here Anoushka Shankar’s sitar battles with Wayne Sorter’s sax while Chaka Khan handles the vocal as loosely as she’s ever done. More straightforward is Ceu’s take on Baden Powell’s Brazilian standard ‘Tempo De Amor’ while Juane’s ‘La Tierra’ offers up more shifting Latin rhythms. Elsewhere ‘Space Captain’ (featuring Derek Trucks and Susan Tedeschi) is a rocky affair (recalling the great Delaney and Bonnie) while James Morrison acquits himself well on a version of Sam Cooke’s ‘A Change Is Gonna Come’. The Chieftains bring a Celtic twist to ‘The Times They Are A Changing’ while a take on Bob Marley’s ‘Exodus’ places it right back in the Rift Valley. The whole project is never less than interesting and different audiences will find different successes and failures, but Hancock himself believes in its power – taking the whole concept on the road through 2010 and beyond.