HERBIE HANCOCK: ‘Magic Windows’ and ‘Lite Me Up’ (Vinyl Masterpiece/PTG) 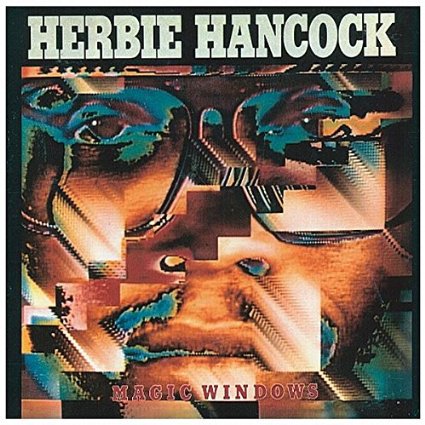 As the ’70s became the ’80s, musical chameleon Herbie Hancock’s career trajectory took a more blatantly commercial direction away from jazz with a series of pop and R&B-oriented vocal albums that chased after a mirrorball funk and disco groove. 1981’s ‘Magic Windows’ received a unanimous thumbs down from jazz purists who bemoaned the album’s patent lack of envelope-pushing instrumentals and accused Hancock of diluting his music and selling out for commercial gain. They may have been right but that didn’t bother a different – and younger – audience lapping up the album’s accessible, radio-friendly material and widening Hancock’s demographic appeal. Said album is now reissued via Dutch ’80s specialist, Vinyl-Masterpiece, who have simultaneously reissued (and remastered) the keyboard maven’s 1982 album, ‘Lite Me Up.’

‘Magic Windows’ yielded a couple of modest US R&B hits in the shape of the funk-infused title track – fronted by Sylvester – and ‘Everybody’s Broke,’ the latter a chugging groove featuring vocalist Gavin Christopher. Christopher’s raspy voice is also spotlighted on the churning dance floor burner, ‘Help Yourself,’ and one of the set’s standout cuts, the mid-tempo groove ballad, ‘Satisfied With Love.’ Despite the occasional keyboard solo, Hancock is virtually a sideman on his own album up to this point but comes into his own on the extended instrumental, ‘The Twilight Clone,’ a track whose mechanised rhythm track and bubbling sequencers presages the robotic beats of the trailblazing ‘Rockit’ from his ‘Future Shock’ album, which the keyboardist would unleash in 1983. This new reissue is appended by a nine-minute disco mix of ‘Magic Number.’

’82’s ‘Lite Me Up’ is a slicker, more pop-focused affair than ‘Magic Windows’ and was Hancock’s first album since the late ’60s not to be produced by his manager Dave Rubinson. Again, it’s dominated by vocal tracks but it’s much more cohesive than its predecessor and the material is of a uniformly high quality, thanks to the input of ex-Heatwave member, Rod Temperton, who contributed to six of the album’s eight cuts. Temperton at the time was producer Quincy Jones’ right hand man when it came to songwriting and Hancock, perhaps enamored by Jones’ production values – he also played on Jones’ 1981 album, ‘The Dude’ – enlists the services of guitarist David Williams, bassist Louis Johnson, and drummer John Robinson (the core rhythm section that appeared on many of Quincy Jones’ ’80s productions). The end result, while not spectacular, is nevertheless good. The opening title track is an infectious uptempo pop-soul groove fronted by vocalist Wayne Anthony, whose smooth baritone graces the slick and super-funky, ‘The Bomb.’ Better still is the fluid, mid-tempo ‘Gettin’ To The Good Part,’ where Hancock provides a vocoderised lead vocal that recalls his ’78 UK hit, ‘I Thought It Was You.’ Hancock also fronts the Jay Graydon-David Foster-helmed beat ballad ‘Paradise.’ Narada Michael Walden moves into the producer’s seat for the upbeat dancer, ‘Can’t Hide Your Love,’ where Hancock again steps up to the microphone (minus his trusty vocoder). Also aimed at the dance floor is the Temperton-penned ‘Motor Mouth’ – stylistically a close musical cousin to his song ‘Razzamatazz,’ recorded on Quincy Jones’ ‘The Dude’ LP – while the album’s closer, ‘Give It All Your Heart,’ is a blithe vocoder duet between Hancock and fellow keyboardist, Patrice Rushen, where their robotic voices intertwine over a simmering rhythm track.

Fans of Hancock’s jazz oeuvre with probably avoid these two albums like the plague but for soul and funk aficionados, they’re definitely of value – particularly the superior ‘Lite Me Up,’ which underscores the Chicago pianist’s versatility, eclecticism and ability to connect with a wider audience.