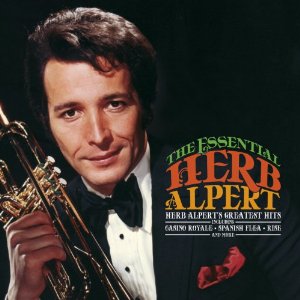 Herb Alpert is something of a US music institution. Even if he hadn’t been a recording artist in his own right, his music business dealings (A&M Records etc) would have made him a major player. Obviously this new double CD package focuses on his artistry and shows his ability to change course and make music right on the contemporary pulse.

The first section of the first CD here offers all the major hits he scored in the sixties as leader of the Tijuana Brass and soul folk, I guess, will skip. If they do they’ll miss catchy novelty/pop instrumentals (‘The Lonely Bull’ et al) as well as the definitive vocal version of ‘This Guy’s In Love With You’. Who says it’s definitive? … None other than the writer – Burt Bacharach.

In the seventies it seems that Herb concentrated on his business dealings but in the eighties he made something of a spectacular comeback – by embracing new technologies and riding the then contemporary soul groove. Working with Jam and Lewis he scored a top 5 US with the Janet Jackson-vocalised ‘Diamonds’ and almost repeated the success with ‘Making Love In The rain’ – Lisa Keith on vocals there. Then, of course, there was ‘Rotation’ and ‘Rise’ – that latter sampled most significantly by the Notorious BIG – who clearly didn’t think Alpert was an old fart! All those cuts included herein, of course.

The second CD in this set sees Alpert as he is now – a lounge jazz artist. The 14 tracks were all recorded live in cabaret and feature his wife, Lani Hall, on a goodly number of cuts. The tunes, by and large, are all standards of the ilk of ‘That Old Black Magic’ and ‘I’ve Got You Under My Skin’ and they are all largely unremarkable – yet they show another facet to the wily Alpert who clearly uses his business acumen to realize how and with what he can make a living at any particular time.