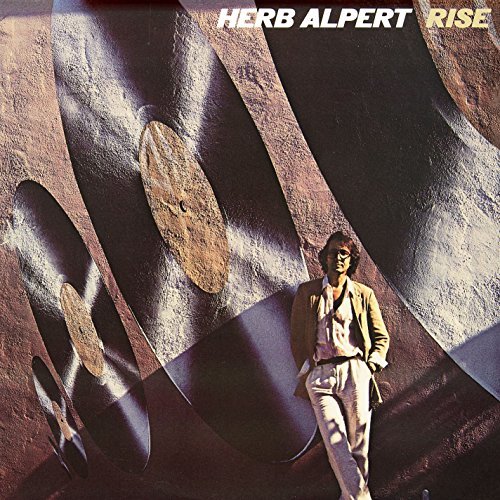 Herb Alpert, the Californian trumpeter and the co-founder of A&M Records, rose to fame fronting the popular easy listening mariachi combo, Tijuana Brass, in the 1960s. They released a slew of albums and scored memorable instrumental hits in the shape of ‘The Lonely Bull’ and ‘A Taste Of Honey’ but ironically, Alpert’s biggest hit of that decade was when he reinvented himself as a vocalist on his 1968 smash-hit version of Burt Bacharach and Hal David’s ‘This Guy’s In Love With You.’  But come the late ’70s as the public’s taste and music styles inevitably changed, Alpert began moving in a funkier direction. Released in 1979, ‘Rise’ – both the single and album – took Herb Alpert into the US R&B charts for the first time (it was also the first digitally-recorded album on A&M Records). Now, as part of a large reissue campaign undertaken by the trumpeter’s own new label, Herb Alpert Presents, ‘Rise’ is back in the shops again, this time remastered and presented in a gatefold mini-replica LP sleeve.

It’s not hard to see why ‘Rise’ lit the R&B charts up. Alpert surrounded himself with some brilliant west coast jazz, soul and funk musicians – including James Jamerson Jr, Louis Johnson, Harvey Mason, Abe Laboriel, Tom Scott, Emil Richards, and Joe Sample – and put together a contemporary set of grooves and moods. The infectious title track with its sinuous, Hispanic-tinged trumpet melody and throbbing, dance floor beat with a hint of strutting street-funk sounds better than ever on this newly remastered edition. The more meditative ‘Rotation’ is also noteworthy while ‘Behind The Rain’ begins with an atmospheric intro before morphing into a thundering disco-powered tone poem with orchestrations by Tom Washington (in the guise of his alter ego, Tom-Tom 84). It’s back to the dance floor on a faithful trumpet-led version of The Crusaders’ ‘Street Life’ – with its co-writer Joe Sample’s piano featuring prominently. Less successful is a pallid cover of Bill Withers’  ‘Love Is,’ with Alpert doubling on vocals on trumpet. There’s also a rendition of ex-Procul Harem member, Gary Booker’s ‘Angelina’  and to close, Alpert serves up a mirrorball re-styling of Spanish composer Rodrigo’s guitar concerto, which is not as cheesy as it sounds and features some terrific Andalusian-flavoured orchestration from Barry White’s arranger, Gene Page.

Though it may not be perfect, ‘Rise’ is nevertheless a commendable example of chilled, jazz-inflected disco-funk, and its title track undoubtedly remains a classic of the genre.