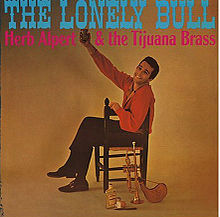 The co-founder of A&M Records (Alpert was the ‘A’ in A&M and his business partner Jerry Ross the ‘M’), 82-year-old HERB ALPERT rose to fame in the 1960s as the trumpet-playing leader of an popular, easy listening instrumental combo, Tijuana Brass, who racked up a pile of hits for his own label and sold millions of albums around the globe. On the eve of releasing a brand new studio album, ‘Human Nature,’ Herb Alpert has elected to reissue his entire back catalogue (24 albums in all) via his a new label he’s founded, Herb Alpert Presents. Reviewing the whole set would be something of a Sisyphean task for even the most diligent and enthusiastic of writers so instead, we’ve cherry-picked a few good ones for your delectation.

Alpert’s Tijuana Brass first made their mark in 1962 with their Hispanic-flavoured hit single, ‘The Lonely Bull,’ which also spawned an album of the same name. The first album in the set of Alpert reissues, it established a blueprint for the distinctive Tijuana Brass sound with its faux Mariachi aesthetics (ironically, none of the band were Latinos nor hailed from south of the border). They wrote some original material but also covered jazz standards and familiar popular songs of the day, reimagining them in the Tijuana Brass sound. Listening to the album now, it’s hard to imagine that this was the epitome of cool for some people, but then anything was possible in the swinging sixties. Delivered without the merest hint of irony, some of the music sounds positively cheesy to cynical 21st century ears but it also has an undoubted charm, reflecting more innocent times, perhaps.

In 1964, Herb Alpert’s Tijuana Brass offered more of the same on their third album, ‘South Of The Border,’ whose best track is the catchy ‘Mexican Shuffle.’ The LP acknowledges the rise of The Beatles,  with a cover of the Fab Four’s ‘All My Loving’ and includes an unorthodox take on Antonio Carlos-Jobim’s ‘The Girl From Ipanema,’ which is delivered as a march. Throughout, Alpert’s cool, laconic trumpet is a dominant presence. His style is staccato-like with short phrasing but he knows how to deliver a melody in a memorable way. Of course, he was no virtuoso jazz improviser  but he certainly had his own sound.

’65’s ‘Whipped Cream & Other Delights’ is arguably the best and most satisfying album of the early Tijuana Brass albums. It shows the band getting groovier and contains a great uptempo version of Bobby Scott’s ‘A Taste Of Honey.’ Other highlights include the jaunty title song and the wonderfully smooth ‘Lollipops And Roses.’  If you’re thinking of acquiring one Tijuana Brass album, then this unquestionably the one to get.  Realising they were on a roll, Herb and his cohorts issued their second long player of 1965 in the shape of ‘Going Places!’ It continued where ‘Whipped Cream’ left off, opening with the classic ‘Tijuana Taxi’ and including the equally catchy ‘Spanish Flea,’ a song that epitomises the cool lounge sound of Tijuana Brass.

Their momentum continued into 1966,with ‘What Now My Love,’ another groovy set of MOR grooves, whose title track was a big hit on the US Adult Contemporary chart. Other highlights include the wistful ‘Memories of Madrid’ and the ultra-catchy ‘Freckles.’ By this time, Tijuana Brass were a slick, well-oiled machine, which is reflected in the precision and polish of their arrangements. Alpert also shows that he can play ballads with deep feeling, exemplified by an emotive ‘It Was A Very Good Year’ and ‘The Shadow Of Your Smile.’

Moving forward to 1968, ‘The Beat Of The Brass’ was Alpert and Tijuana Brass’ tenth album together and though the majority of it was the musical equivalent of ‘business as usual’ what was truly surprising was the album’s final cut, ‘This Guy’s In Love With You,’ a pensive ballad from the redoubtable pen of Burt Bacharach and Hal David. It featured Alpert on vocals and was originally recorded for a television special but due to public demand was released as a single, reaching number one in the USA (it was A&M’s and Alpert’s first chart topper). Sounding as fresh as the day it was recorded, this tmeless song remains a high point in Herb Alpert’s canon.

Significantly, Tijuana Brass would disband a year later and Herb Alpert would go on to launch a successful solo career but these reissues – all remastered by noted sound engineer Bernie Grundman and issued in gatefold mini LP sleeves – take us back to the dawn of his life in music. It’s an epoch that is evocatively brought back to life by these six vintage albums, whose music has lost none of its lustre and appeal over time.