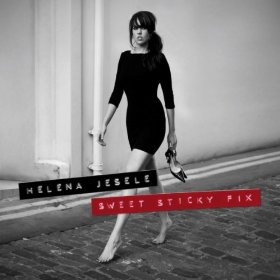 A statuesque Dubliner with alluring model looks, Helena Jesele possesses a noteworthy voice to match her striking physical appearance. There’s a sultry and slightly acerbic jazz tinge to her soulful delivery, which is framed on this 10-track album by glossy production values and widescreen arrangements thanks to shared input from Brooklyn-based production duo, Truth & Soul, and noted pop producer, Paul O’Duffy (whose credits include Swing Out Sister, Dusty Springfield, Lewis Taylor and Amy Winehouse). The vibe is distinctly retro – think Amy Winehouse meets Portishead – and the album’s dark and atmospheric sonics create a noir-esque aura with a hint of danger and intrigue. In terms of its mood, then, ‘Sweet Sticky Fix’ is purposefully consistent – a series of absorbing urban vignettes focusing on love and life that veer from addictive cravings (the brilliant ‘Lovesick Avenue,’ arguably the album’s standout song) to redemptive visions of salvation (‘Angel Save Me’). Soul fans are likely to gravitate towards the catchy ‘Sun Is Rising,’ an upbeat dancer that rides on a faux Motown-esque groove. The music here is not soul in its traditional and orthodox sense but rather a sophisticated, stylish pop confection that is infused with soulful elements that render it an unclassifiable hybrid. Crucially, Jesele’s songs also possess infectious hooks, which allied with her strong vocals and lush cinematic arrangements, results in an album that just like the 6-foot chanteuse herself stands out from the crowd.