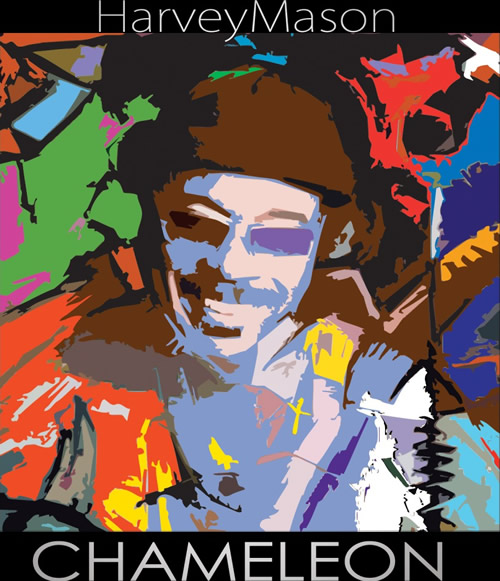 ‘Chameleon’ is a great name for a Harvey Mason album; ‘cos like the exotic little creature the veteran drummer is multi-facetted, ever-changing and enjoys the ability, with his music, to switch moods effortlessly. Mason, of course, is a top session drummer, producer, composer and recording artist– both in his own right and with the award winning Fourplay.

On ‘Chameleon’ he revisits his 70s roots offering a set that’s a mix of seven of that decade’s most enduring jazz and soul tunes and a selection of Mason originals that pay musical homage to the 70s. To help him deliver, he’s enlisted a top team – amongst them Yellowjacket Jimmy Haslip, Bill Summers (percussion) and Paul Jackson (bass). Summers and Jackson worked with Mason on Herbie Hancock’s landmark ‘Head Hunters’ album and a cut from that LP – ‘Chameleon’ is not only this set’s title cut but also the chief focus. Mason’s cover is imaginatively arranged and cleverly incorporates the intro to another Hancock classic, ‘Watermelon Man’.

The other covers include versions of Grover Washington’s ‘Black Frost’, Bobby Hutcherson’s ‘Montara’ and Patrice Rushen’s ‘Before The Dawn’. All are quite different in feel to the originals as are the album’s two big vocals – covers of ‘If I Ever Lose This Heaven’ and ‘Places And Spaces. On the Pam Sawyer/Leon Ware song the lead is taken by Chris Turner while on the Donald Byrd hit the vocal is from Corey King. In keeping with the rest of the covers these two reinvent the songs – slowing them down to an almost lugubrious pace. This jury’s still out on whether they work, though ‘Places And Spaces’ does feature some inspired trumpet from Christian Scott.

The albums originals – tunes like ‘Looking Back’ – are jaunty 70s style jazz-funk workouts with the best groove being the all too short ‘Mase’s Theme’. I would have liked to see this sketch lengthened – particularly the haunting keys of newish kid on this kind of block Mark de Clive–Lowe. Mason’s keenness to use musicians like de Clive-Lowe underline his determination to evolve and change – like that little chameleon, with whom the drummer shares his nickname.