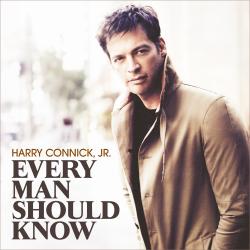 Harry Connick Jr claims that ‘Every Man Should Know’ is the most honest and emotional album he’s recorded. Each listener will have to make up their own minds about that, but what everyone can agree on is that the 12 tracker is his most varied. Over the last few years, Connick’s moved more and more away from the jazz and swing with which he made his musical name and developed a style that’s become a little poppier and, dare we say it, Bubblé-fied. The huge success of Michael Bubblé – who essentially does what Harry’s been doing for years – has made many artists  take stock, and here there are a number of cuts that have that easy-on-the-ear pop swing and swagger in which the Canadian crooner specialises. The title cut, the catchy ‘You Got It’ and the brassy ‘Friends’ wouldn’t (at first hearing, anyway) be out of place on a Bubblé collection but after a few listens you’ll realize there is a difference. The Connick songs are deeper – more mature. Take ‘Every Man Should Know’; the song’s theme that there’s more to being a man than just having the practical skills in which some men celebrate their “man ship”. Connick’s’ contention is that all men should know the capacity to love… deep stuff.

Elsewhere there’s deeper. The dramatic builder that is ‘Come See About Me’ is about the physical and mental pain of seeing someone walk away; ‘The Greatest Love Story’ (replete with Nashville flavours) is Harry’s ode to his wife, Jill, it also contains insightful references to his late mother Anita; but if you want real melancholy, try ‘Love My Life Away’… the story here is of a man with a terminal illness who realizes that he’s plodded along for most of his life… and sadly with months left, he’s still plodding. Poignantly he now just wants to die in the arms of the one he loves.

Happily there are cheerier songs too – like the lovely Latin shuffle ‘I Love Her’ – a simple affirmation of the joys of romance… great guitar here from Jonathan DuBose by the way. Other album guests include Branford Marsalis whose soprano sax enriches ‘Let Me Stay’ while the other Marsalis, Wynton, extends the reflective mood of ‘Being Alone’ with some sensitive trumpet.

The loose New Orleans flavoured ‘S’pposed To Be’ and the lounge jazz ‘Being Alone’ add to the diversity…so like we said up top – plenty of variety  … and on reflection, yes – honesty and emotion.