HAROLD MELVIN AND THE BLUE NOTES: Black and Blue (bbr) 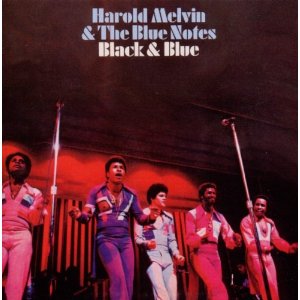 I’m sure all soul fans of a certain vintage will vividly remember the release of Harold Melvin and the Blue Notes’ 1972 Philadelphia International debut. The eponymous album sounded like nothing that had gone before it and, of course, it introduced to the world the searing soul of Teddy Pendergrass. It was (indeed is) a fabulous soul set and regularly features on those annoying lists of “all time greats”. The majesty of the album had everyone waiting eagerly for a follow up and when ‘Black And Blue’ came in ’73 I think it’s fair to say that soul folk were disappointed. Reissue specialist bbr have just re-released the set and so, after a long absence, we can all reassess it, and my verdict – for what it’s worth – is that the LP is much, much better than what we thought back in 1973.

Maybe the disappointment back then stemmed from the naff opener – a short take on the ‘Cabaret’ show tune. Back in 1973 we asked ourselves “what’s this all about?” – forgetting that the group were originally conceived by leader, Melvin as a cabaret outfit (that’s where the money was remember). Anyway, CD and all the other new technologies allow you to skip it and go straight to ‘The Love I Lost’… and what a great tune that still is; a perfect example of the soul of Philadelphia International. Then, of course, there’s the set’s other big up-tempo moment – ‘Satisfaction Guaranteed’… maybe not quite up there with the very best but still able to secure dance floor action. Of the ballads on ‘It All Depends On You’ and ‘I Coming Home Tomorrow’ the boys try hard to emulate the gems on their debut and they almost succeed. Interestingly, in retrospect you can also hear how Gamble and Huff were trying hard to recreate the vocal dynamics of the Dells. Disappointment? Not at all … ‘Black And Blue’ is a great soul album and this reissue is enhanced with single mixes of ‘The Love I Lost’ and ‘I’m Weak For You’ and comes complete with a thoughtful essay from MFSB’s Bobby Eli.