HANNAH WILLIAMS AND THE TASTEMAKERS: A Hill Of Feathers (Record Kicks) 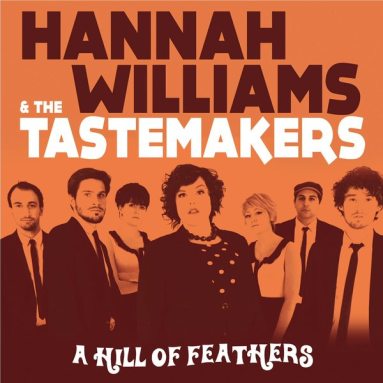 Hannah Williams and the Tastemakers are a London based 9 piece soul and funk outfit with an authentic Church-raised , testifying sound. We’re told that Hannah’s father was a musically gifted preacher man and he passed his musical passion on to his daughter who was clearly weaned on the gospel according to James Brown and Etta James. The band recorded a vinyl only 45 earlier this year and it soon won the acclaim of people like Sharon Jones. The new Queen of Funk, on hearing Ms. Williams’ take on big-woman blues and soul, declared that she’d at last found a singer who was “blessed” whie new age funkateer Charles Bradley simply dubbed Hannah, “The Funk!” DJ Craig Charles was won over too and he took the band on the road with him but at sell out shows up and down the UK it was hard to decide who was supporting who. A deal with Italy’s Record Kicks label soon followed and the result is this mighty album – ‘A Hill Of Feathers’.

The 10 tracker is a monumental, tough piece of work. Raw, unbridled and passionate, it takes no prisoners with the band showing their intent from the off with the broody ‘Work It Out’. It’s a brave decision to begin an album with a slow cut, but Hannah and her people clearly aren’t bothered by music biz convention; they just want to prove what they can do as they tear into a bluesy stormer that has its musical origns in ‘It’s A Man’s Man’s Man’s World’ . ‘Tell Me Somtething’ keeps things down tempo while ‘(When Are You Gonna) Say You ‘re Mine’ and ‘Washed Up’ are two more searing slowies with a set of mournful strings cranking up the soulful tension on the latter.

The pace is ratcheted right up on the sparse funk of ‘Do Whatever Makes You Feel Hot’ (here Hannah name checks her inspiration, James Brown).’Don’t Tell Me’ is another JB inspred item while ‘The Kicthen Strut’ is a fine dancer in the classic “dance craze” mode. Ms W and her Tastemakers haven’t forgotten the Northern brothers either . A version of Barbara Lynn’s ‘I’m A Good Woman’ is a truly authentic modern take on Northern Soul, while ‘Things To Come’ is one of those almost throwaway, catchy instrumentals that surface from time to time on the Northern scene. It features some great, lazy sounding brass work (remember ‘Candy’ by the Astors?) from the three piece horn section – Chloe Harvey (trumpet), Gina Tratt (saxophone) and Sabrina Di Mitri (saxophone). Indeed, throughout, all the Tastemakers (led by guitar man Hillman Mondegreen) sound like they’re having a real ball – all adding to the infectious, organic feel of the album.

‘A Hill Of Feathers’ is a bit of an enigmatic title for an album, isn’t it? There’s nothing enigmatic about the music though. It’s raw and honest soul and funk all the way – and, moreover, it’s played with disicpline (in the manner of James Brown, of course). I doubt if you’ll hear any new music as “for real” as this in what’s left of 2012 . Find out more @ www.recordkicks.com