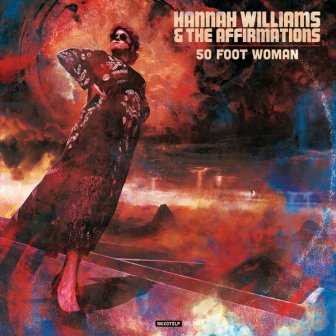 Big voiced UK soulstress HANNAH WILLIAMS first came on our radar back in 2012. At that time she was fronting a funk combo, the Tastemakers and together they were promoting their debut long player, the enigmatically titled ‘A Hill Of Feathers’. Craig Charles championed it and most other soul commentators gave it the thumbs up!

That early success was followed by a string of gigs here in the UK and over in Europe. Then came another long player – ‘Late Nights & Heartbreak’, which was credited to Hannah Williams and The Affirmations and it was never fully explained if they were a totally new bunch, remnants of the Tastemakers, or indeed the Tastemakers with a new name! The constant was Ms Williams’ fiery, full-on, take-no-prisoners vocals and that voice carried the day on the hit ‘Tame in the Water’ and the LP title track that went on to be sampled by Jay Z.

And it’s THAT remarkable voice that dominates the lady’s new album…. ’50 Foot Woman’. The title track opens proceedings and with its furious Northern soul tempo, blaring horns, chinking guitar and frenetic backing vocals, the tone is set for what follows… a fierce, unrelenting take on old school soul. There are plenty more wild flavours on offer so the slightly more sedate ‘I Can’t Let This Slip Away’ offers some (a little) respite.

Produced by Shawn Lee (credits include Amy Winehouse, Alicia Keys and Young Gun Silver Fox), Hannah says that she’s never been as proud of anything in her life as she is with ’50 Foot Woman’. You can hear if that pride’s misplaced when the album is released on Italian label Record Kicks on October 18th