HANK BALLARD and the MIDNIGHTERS; Unwind Yourself (Kent) 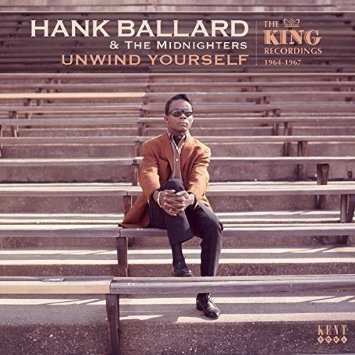 Hank Ballard will, sadly, forever be remembered as the man who gave away the Twist! Born John Henry Kendricks in Detroit in 1927, Ballard wrote and recorded the song that spawned an international phenomenon in 1960. Unfortunately for Hank, he put in on a B-side that eventually intrigued execs at Cameo Parkway. They had their man, Chubby Checker, record it and the rest is history!

Proper soul fans, however, know there’s much more to Ballard than ‘The Twist’. He enjoyed his own success before and after that dance craze and like, say, Jackie Wilson, he’s rightly regarded as a seminal artist who helped soul evolve from earlier R&B forms.

This new 26 track Kent CD focuses on Ballard’s later, post Twist career. It anthologises the recordings he made for King Records between 1964 and 1967 and, backed by his band, the Midnighters, it proves that like the aforementioned Wilson, Ballard evolved into a consummate soul performer.

The collection is named for ‘Unwind Yourself’ – a driving funk workout that owes a lot to James Brown’s ‘Cold Sweat’ . Anoraks will no doubt recall Marva Whitney recorded the song too and much of the rest of the material here is in the same vein… sparse, sweaty funk, typified by stuff like ‘Funky Soul Train’.

Elsewhere there are re-recordings of some of Hank’s 50s hits like ‘Work With Me Annie’ and collectors will be delighted to know that some 20 of the 26 tracks are reissued here for the first time! None were particularly successful but maybe Ballard wasn’t too bothered. Royalties from ‘The Twist’ (just think of those radio plays alone!) brought him a comfortable life style and prior to his passing in 2003 he was happy to occasionally work the oldies circuit and bask in the glow that his 1990 Rock and Roll Hall Of Fame induction brought him.