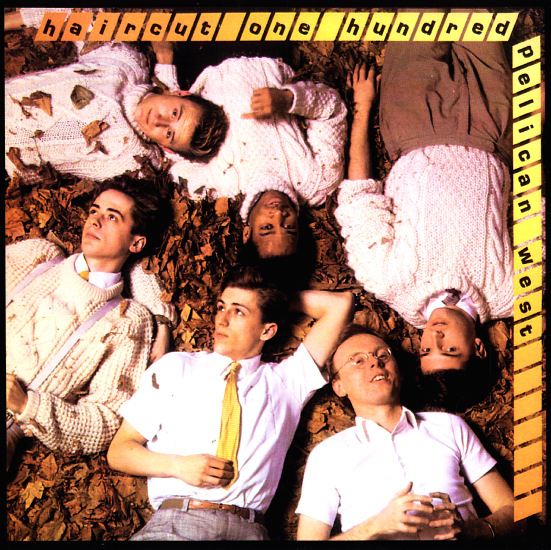 Haircut One Hundred were a one-album wonder who briefly carried the torch – alongside early Wham, ABC and Funkapolitan – for homegrown British pop-funk in the early ’80s. With their toothy smiles, Aran sweaters and danceable, effervescent sound, they were a bright beacon of hope in the gloomy, post-Joy Division pop landscape of the UK at the start of a decade that would eventually be remembered for the vibrancy and vividness of its fashions as well as music.

The six-piece band led by singer/guitarist Nick Heyward announced themselves to the world with ‘Favourite Shirts (Boy Meets Girl),’ a fast and furious funk groove with loud horn blasts that strode into the upper echelon of the UK pop charts. It’s the opening cut on this 2-CD reissue of the group’s only album, ‘Pelican West,’ which dropped in ’82. Distilling funk and jazz influences (the band boasted a good brass section and weren’t averse to the occasional saxophone solo), the group served up an entertaining platter of strong vocal tunes and zesty, sunshine-drenched Latin-flavoured instrumentals (exemplified by the surrealist imagery of ‘Lemon Firebrigade’). Two more singles were issued from the album, the super-infectious ‘Love Plus One’ and ‘Fantastic Day,’ both even bigger hits than ‘Favourite Shirts.’ They were more pop-oriented but elsewhere on the album, the band showed that they can really groove (as on ‘Marine Boy,’ ‘Baked Bean,’ and ‘Kingsize [You’re My Little Steam Whistle]).

The first CD includes the original configuration of ‘Pelican West’  and is bolstered with sundry B-sides (‘Boat Party,’ ‘Ski Club,’ and ‘October Is Orange’) as well as the non-album single, ‘Nobody’s Fool.’ If that weren’t enough, there’s a second disc packed with a welter of 12-inch singles mixes, extended iterations and a live version of ‘Favourite Shirts.’ Sadly, success seemed to affect the band adversely and during the strained sessions for an intended second LP, Nick Heyward – the band’s poster boy – quit and began a moderately successful solo career.  This album, though – unlike many ’80s albums – has stood the test of time (mainly to its organic production style and good songs) and stands as an enduring and enjoyable monument to the short-lived but much-loved Haircut One Hundred in the largely ephemeral, here-today, gone-tomorrow world of pop music.