GWEN McCRAE: ‘Lay It On Me – The Columbia Years’ (P&C/Reel Music) 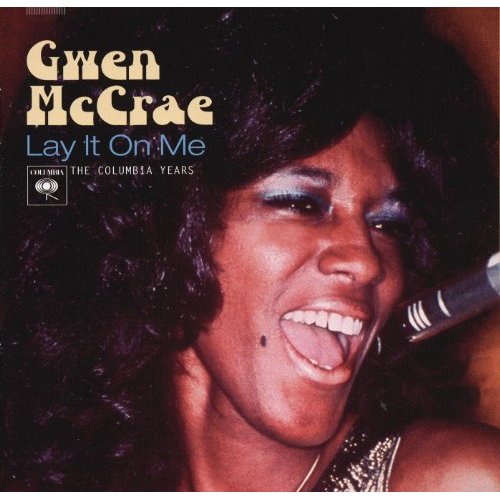 Gospel-reared Florida soul singer Gwen McCrae scored her biggest US hits for Henry Allen’s Miami-based Cat label (a subsidiary imprint of TK) between 1973 and ’76, the biggest of which was ‘Rockin” Chair’ in 1975. McCrae’s recording career began in 1970 at major label Columbia where she just failed to crack the American R&B Top 3 with ‘Lead Me On,’ a simmering slice of sultry southern soul. Four more Columbia 45s followed during the next two years but failed to crack the charts, resulting in the singer and the record company parting ways. A few years ago, soul indie Reel Music combined all of McCrae’s Columbia sides (which comprised eleven tracks in all) into an album called ‘Lay It On Me,’ which after being deleted, has now been reissued.

‘Lay It On Me’ contains some of Gwen McCrae’s most potent work. She recorded all the tracks in Memphis in the company of the celebrated Memphis Boys session group with Steve Alaimo in charge of production. ‘Ain’t Nothing You Can Do’ is a great opener to this collection but flopped as a single. It’s hard to see why. The song’s strong, the arrangement is top notch (reminiscent of Elvis’s ‘Suspicious Minds,’ that the Memphis Boys also played on) and Gwen McCrae’s performance is magnetic. The Elvis connection is even more tangible on McCrae’s soulful version of  his 1972 hit, ‘You Were Always On Mind’ (co-penned by Mark James, who wrote ‘Suspicious Minds’).  ‘Goin’ Down The Road’ is a delightfully slice of rolling country-soul while ‘Leave The Driving To Us’ is a pro-feminist anthem with funk undertones that recalls Aretha Franklin’s finest Atlantic work. ‘Been So Long’ with its thumping back beat and declamatory vocal is similarly strident. More mellow is the hypnotic ‘I’m Losing The Feeling,’ boasting soft horns, bluesy guitar licks and a subtle but steady funk undertow. Ballad-wise, there’s some good stuff here too – the piano-led slow jam, ‘He’s Not You,’ is tenderly romantic and augmented with orchestral strings. Much overlooked, Gwen McCrae’s short stint at Columbia yielded some great music that deserves wider exposure – with any luck, this superlative reissue will help spread the word. Get it while you can.