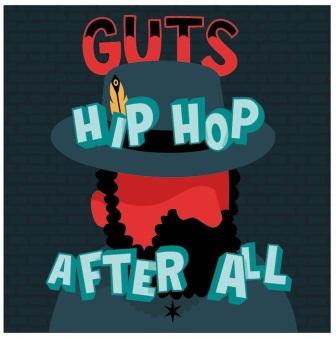 Guts (Fabrice Henri) is a French muso famed at home for crafting quality beat patterns – some of which, like ‘Brand New Revolution’, became underground European hits. Up to now most of his music has been instrumental but for this latest venture he’s invited quality MCs and singers to embellish his grooves and the result is an adventurous and intriguing 16 tracker.

In fairness lots of soul folk will be put off by the album’s title. Guts cut his musical teeth on the French hip hop scene of the 90s. (He was a key member of one of France’s top rap crews, Alliance Ethnik) and naturally there’s a lot of rapping here with input from people like Tanya Morgan, Rah Digga and Grand Puba (from Brand Nubian). In between the rapping, however, there’s some interesting, experimental soul that some may want to investigate.

Best of that bunch is an insidious little tune called ‘Roses’. The vocalist is Houston’s Leron Thomas. Now working out of New York, the trumpeter and singer adds a laconic vocal to a great mid-tempo 70s style groove that recalls the best of the Mizell Brothers. Leron’s there too on another cut…. a clever tune called ‘Man Funk’. This one starts off as an insistent old school groove before morphing into something that good old George Clinton would be proud of.

Elsewhere, soul folk might connect with ‘A Glimpse Of Hope’ – a gentle ballad, and the lazy R&B ramble that is ‘The Forgotten’. Sometime SoulandJazzandFunk favourite, Cody Chesnutt’s in the mix too. His track, ‘Enlighten’, though, is disappointing. Heavy and with an extended rap, it lacks focus. Best of the set’s instrumentals are the insistent title cut and ‘Looking For The Perfect Fender’ – which, as the title suggests, is a meandering Fender Rhodes-led groove.

‘Hip Hop After All’ is never less than interesting and in ‘Roses’ and ‘Man Funk’ you have two great soul tunes. Those two are worth investigating.