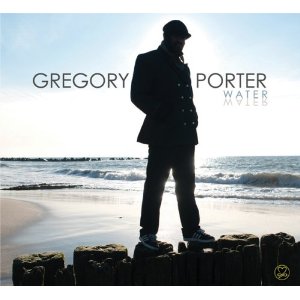 The announcement that Gregory Porter’s album ‘Water’ had been nominated for a Grammy in the Best Vocal Jazz Album category caused a few ripples simply because few had heard of Porter. Many jazz buffs assumed he was a fresh-faced newcomer to the biz but on the contrary, Porter is something of a veteran. Born in California, but working out of New York City, Porter cites Nat King Cole as the inspiration for him to take up a musical career. Indeed he has a touring show that uses song and narration to tell the story of Cole. Porter is also an original cast member of the Tony-nominated musical ‘It Ain’t Nothin’ But The Blues’ and he’s toured the States in a leading role in the musical ‘The Civil War’. Previously he’s recorded with Hubert, Ronnie and Debra Laws and he’s worked with – amongst others – Wynton Marsalis and The Lincoln Centre Jazz Orchestra.

‘Water’, though, is Porter’s first full solo album and it certainly is a sparkling and mature debut. It boasts 11 tracks – seven original songs and four covers. Ironically, maybe – given Porter’s love of Nat Cole, none are associated with his hero, though on Burke/Van Heusen’s ‘But Beautiful’ and Hoagie Carmichael and Johnny Mercer’s ‘Skylark’ Porter’s diction and delivery is as precise as anything Cole delivered. Porter’s original songs offer a lyrical mysticism and they’re held loosely together by the ‘Water’ theme. ‘Pretty’ is the best straight love song on the set while ‘Wisdom’ is bluesier altogether with a message about how we should acknowledge the debt we owe to our forefathers. Another big tune is ‘1960 What?’ This one tells the story of the riots that forever changed Detroit. It has a real flavor of soul-jazz about it and should recall the story telling and passion of Oscar Brown Jr. Elsewhere in Porter’s delivery you may hear echoes of Joe Williams and Lou Rawls –even the intimacy of Jon Lucien. Throughout, Porter’s work is assisted by a fine acoustic band with a horn section that features veteran sax man James Spaulding and the sparkling piano of Chip Crawford. It’s impossible to speculate whether ‘Water’ will take the Grammy … but it’s certainly a contender.