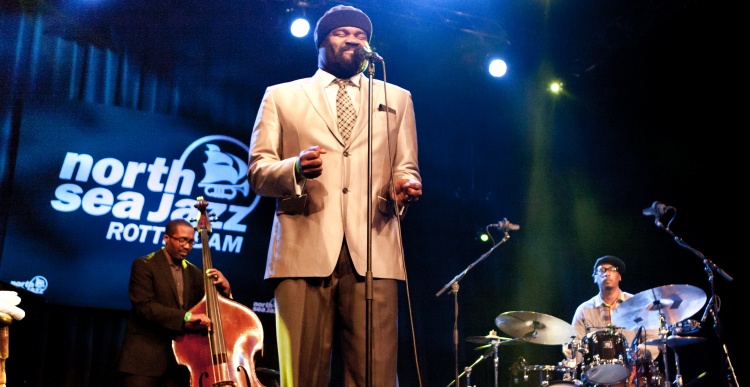 Jazz’s only true global superstar, it was no surprise that “the cool cat in the cap,” Gregory Porter, quickly packed out Rotterdam’s Maas hall, a capacious auditorium which resembled a giant aircraft hangar and accommodated several thousand people. For such a large venue, the acoustics were surprisingly good and for those who were too far away from the stage to see the action, there were large screens projecting close-ups of the musicians. Immaculately attired as usual, Porter came on stage to raucous applause and then delivered a spellbinding set that showed why he is the jazz scene’s man of the moment. His voice – steeped in the cadences and fervent expression of gospel music – proved to be a magnificently expressive instrument, which was sympathetically accompanied by an inventive band led by pianist Chip Crawford.

Porter mixed and matched material from all four of his albums and also included a bluesy take on The Temptations’ ‘Papa Was A Rollin’ Stone’ which preceded a passionate version of ‘Musical Genocide.’ His church roots came to the surface on a super-charged medley of ‘Liquid Spirit’ and ‘Wade In the Water’ while in acute contrast, the beautiful ballad, ‘Hey Laura,’ was notable for its nuanced tenderness. But it was a combustible rendition of Porter’s polemic Civil Rights soul sermon, ‘1960 What?,’ which climaxed the show, and where the big man from Bakersfield, California, showed his considerable cathartic power and soulful majesty.