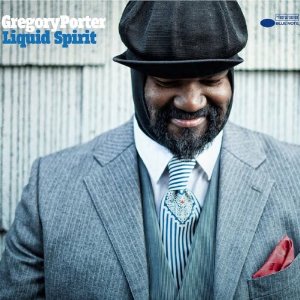 Gregory Porter’s ‘Liquid Spirit’ has been one of the most eagerly awaited albums of the year. The California-born, Brooklyn-based singer’s first two albums (along with some fine cameos on other artists’ sets … try his ‘Love Works’ duet with Robin McKelle) won him a huge fan base and leaked tracks from the new 14 tracker will guarantee this LP flying off the shelves. Without the clever advanced hype, though, ‘Liquid Spirit’ would have been a best seller anyway… quality, real soul and passion always outs and the set is stuffed with all three of those admirable attributes.

The cut that’s been getting all the advanced air play has been Porter’s super-charged version of Dobie Gray’s ‘The In Crowd’… though this new version owes more to the Ramsey Lewis 1965 soul-jazz cover than the Gray original. Porter’s pianist and musical director, Chip Crawford takes the Lewis role with real panache while the vocal’s soulfulness reaches back to the golden years of the 60s… passion and commitment, NOT histrionics or pyrotechnics, and surely that’s part of the attraction of Porter’s music. Like all the great soul vocalists (Sam Cooke, Marvin Gaye, Curtis Mayfield.. even Nat King Cole on whose music Porter was brought up), he doesn’t need to resort to gimmicks. He just lets his voice do all the work and he knows precisely what kind of songs to craft to allow that magnificent instrument to shine. Hear it to best effect on the outstanding ballad ‘Water Under Bridges’. With minimal piano accompaniment (that man Crawford again) it’s a master class in melancholy… the saddest, most moving song you’ll hear in a long, long time. To quote a 60s soul classic from Irma Thomas, “anyone who knows what love is will understand”.

‘Hey Laura’ and ‘No Love Dying’ are two more haunting, reflective ballads while the urgent title cut harks back to Porter’s days with the gospel choirs in and around Bakersfield. Other highlights include the swinging ‘Free’, the light, summer vibe that is ‘Wind Song’ and the didactic ‘Wolfcry’ but in honesty there’s nothing here not to like. Moreover, Porter has proved the early gainsayers wrong. Some believed that signing to a major label (Blue Note/Universal) would dull his edge or dampen his spirit of adventure. Quite the contrary; he’s insisted in using his usual musicians (Crawford on piano, Emanuel Harold on drums, bassist Aaron James and sax men Yosuke Sato and Tivon Pennicott) and between them they’ve allowed the Gregory Porter sound to mature and develop. In that process they’ve created one of the year’s truly essential albums.