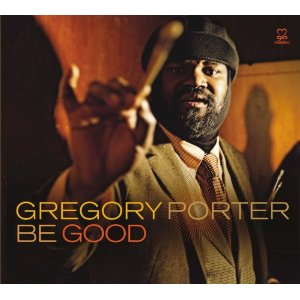 It might be a tad early to start compiling a list of best albums of the year in the soul and jazz categories, but at the end of 2012 I’ll wager that this second album by Californian singer/songwriter Gregory Porter will be near the top of most pundits’ end-of-year charts. His debut album, the Grammy-nominated ‘Water,’ was an impressive piece of work but this sophomore effort ups the ante even further and finds the hirsute, hat-donning Los Angeles native raising his game to a remarkable new level.

The opening cut, the tender, beautifully-wrought ‘Painted On Canvas,’ which is a meditation on the human condition, is very moving – as much for its poignant lyrics as it is for Porter’s super-sensitive delivery. The same goes for the plaintive ‘Be Good (Lion’s Song)’ which explores a romantic relationship with an unusual metaphor. This is a soul man with a jazz heart – or maybe a jazz man with a soul heart. Whatever, it’s a moot point. The guy sings with incredible passion, tenderness and intelligence – his songs are touching but not cloying or saccharine. Take the amazing ‘On My Way To Harlem,’ which is one of the best songs soul and jazz buffs will hear all year. It’s propelled with a pulsing jazz-dance groove that’s almost Motown-esque during the stomping refrain section, and features a lyric that while nostalgic with its images of Duke Ellington, Langston Hughes and Marvin Gaye has a contemporary, bittersweet bite: “you can’t keep me away from where I was born,” sings Porter, “I was baptised by my Daddy’s horn.” It’s an astonishing, incredibly beautiful and uplifting piece of work.

By contrast, ‘Mother’s Song’ and ‘Real Good Hands’ – the latter a homely romantic tale about a man asking his girlfriend’s father for her hand in marriage – have shades of Bill Withers and Gene McDaniels in their musical DNA and vivid storytelling qualities. The melody of the latter song is memorable too, something that is a salient characteristic of Porter’s songwriting generally. He knows how to create a melody that is infectious and which has an air of familiarity about it without it being trite or derivative.

There are only three covers on the album though Porter shows he’s a good interpreter of others’ material – ‘Imitation Of Life’ is transformed into a nocturnal ballad while ‘Work Song’ is a vigorous retooling of the Nat Adderley/Oscar Brown Jr classic, complete with some athletic scatting from the singer. The set closes with a subdued but impassioned a capella rendering of Billie Holiday’s ‘God Bless The Child.’ It rounds off what is a stunning showcase for Gregory Porter, who, judging from his recent appearance on Jools Holland’s TV show and a Carole King special on BBC4, is a rising new star in the jazz firmament.