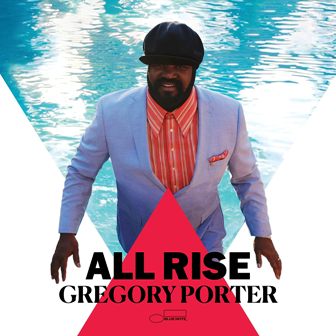 It was way back in January that Gregory Porter announced he was set to release a new album – his first since 2017’s ‘Nat King Cole & Me’. The LP, ‘All Rise’, we were told was pencilled in for April release. Of course, the world has changed since then and Porter and his team at Decca/Blue Note have pushed the release date back time and time again. In the meantime we’ve had our appetites whetted with, I think, five singles – the most recent being ‘Concorde’ –a tie in with the recent NASA Mars space probe.

The good news is that at last ‘All Rise’ is being released – at the end of August – and the question, of course, must be, has the wait been worth it. The simple answer is a resounding YES. In a year in which we’ve already enjoyed some excellent soul and jazz albums, this, so far, is easily the best – by a long way. Why? Well, it’s clear that ‘All Rise’ has been put together with real love and many of the songs extol the virtues and benefits which that emotion can bring. Then, it’s obvious that this is the most personal album that Porter has recorded – many of the songs touch on his life’s journey  and the emotion and soul which that brings to the music is patent. Thirdly, everything is accessible. There are no clever gimmicks or musical indulgences. Porter tells it like it is and it’s the better for that. Producer Troy Miller knows about accessibility – his CV includes work with Calvin Harris, Rag N Bone Man and Amy Winehosue. Fourthly, Greg and Troy use tried and tested players – The Cat in the Hat’s loyal band  and , when the occasion demands, they deploy (beautifully) a 10-member choir and the London Symphony Orchestra Strings. And finally and obviously – that remarkable voice. Need we say more?

So what’s the musical fare? Well expect everything from rousing gospel – like ‘Thank You’ and ‘Revival Song’ (homage to the man’s roots) to beautiful ballads like the standout ‘If Love Is Overrated’  and ‘Modern Day Apprentice’ with its vaguely Irish air. In between there’s nothing that will disappoint. Here’s just a few treats; ‘Dad Gone Thing’ is a musing on absent fathers (his dad was an absentee … “my missing link”); ‘Mr Holland’ chimes with the Black Lives Matter movement; ‘Real Truth’ is a wonderful plea for honest love… “Leave your ego at the door, open your heart and you’ll receive the real”. We could, of course, go on, but that would be labouring the point. ‘All Rise’ is just  a tremendous album that will seamlessly connect with your soul.

Porter says the album is a mix of “jazz, soul, blues, and gospel” featuring “heart-on-sleeve lyrics imbued with everyday philosophy and real-life detail”. He’s spot on in his summary but our man’s far too modest to claim that it is also a work of soulful beauty… it is!