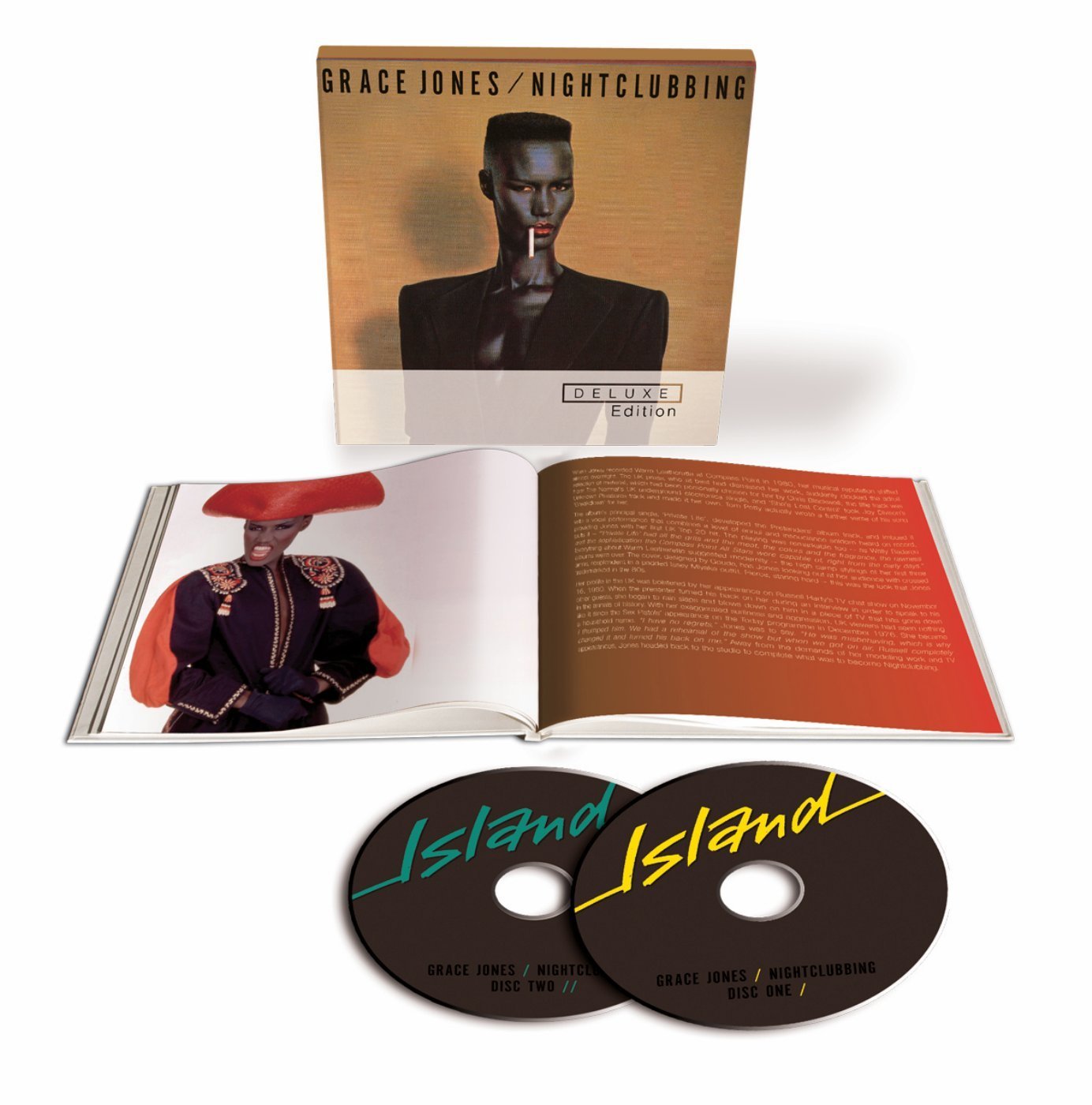 Though she began her music career at the height of the disco inferno in the late ’70s, Jamaican model-turned-singer Grace Jones was never an orthodox – or, arguably, a natural – musician and as the ’70s became the ’80s, her uniqueness (both visual and musical) really began to shine through her recordings. It was on her fourth album for Chris Blackwell’s Island label, 1980’s ‘Warm Leatherette’ – which included a mesmeric hit deconstruction of rock group The Pretenders’ ‘Private Life’ – that Jones changed direction and found a distinctive sonic niche that seamlessly fused mutant dance beats with deep reggae-infused grooves, funk rhythms and oodles of New Wave attitude. The key to her transformation was producer Chris Blackwell teaming her up with Bahamas-based Compass Point rhythm duo, Sly Dunbar and Robbie Shakespeare, who would go on to play a pivotal part in shaping the sound of her next three LPs.

Now 33 years old, Jones’ fifth album ‘Nightclubbing’ – the successful follow up to ‘Warm Leatherette’ – is reissued by Universal in an expanded 2-CD format (a double-LP vinyl version and several other configurations are also available). Though Jones’ idiosyncratic style didn’t seem to find much favour with soul fans back in the day, her music tended to be embraced by NME-reading rock and pop fans in search of something more dark and exotic. And back in 1981, nothing in music seemed more exotic than the striking Ms. Jones, whose carefully cultivated image (on Jean Paul Goude’s classic cover to ‘Nightclubbing’ she resembles some kind of cold, futuristic cyborg) was matched by the seeming impassivity of her vocals. On ‘Nightclubbing’ Jones cleverly refashions Flash & The Pan’s ‘Walking In The Rain,’ Bill Withers’ ‘Use Me,’ Sting’s ‘Demolition Man,’ and Iggy Pop’s David Bowie-co-penned title song into something very different from the originals, with her vocals sounding robotic and almost devoid of emotion. But for those that thought that Jones was a one-trick pony, tracks like the beautiful closer, ‘I’ve Done It Again,’ reveal that she could sing well and with real sensitivity. Her reconfiguration of Argentine accordionist Astor Piazzolla’s ‘Libertango’ into the haunting ‘I’ve Seen That Face Before’ is also one of the album’s major highlights.

The best cut, though, has always been the glorious ‘Pull Up To The Bumper,’ a loping slice of Caribbean funk topped off with an infectious chorus. And for those that can’t get enough of that classic ’80s track, on disc two there are five different versions of the song: a long version, a remix version, a party version, a 1985 remix and a dubby, bass-and-percussion-heavy instrumental mix titled ‘Peanut Butter.’ The second CD also features 12-inch versions of ‘Demolition Man,’ ‘I’ve Seen That Face Before,’ and ‘Walking In The Rain’ as well as extended mixes of ‘Use Me’ and ‘Feel Up.’ There are also two previously unreleased outtakes from the ‘Nightclubbing’ sessions – a passable mid-tempo track called ‘If You Wanna Be My Lover,’ and Jones’ excellent reggae-fied take on Tubeway Army’s Gary Numan-written ‘Me! I Disconnect From You.’ Daryl Easlea’s insightful liner notes round off what is a very good reissue of an album whose influence is still percolating through popular music over thirty years after its initial release.