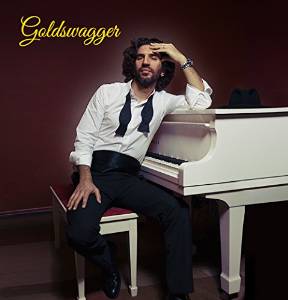 Goldswagger is the performing alter ego of New York producer/ guitarist/ bassist/ keyboardist/ percussionist Michael Goldwasser. Till now he’s focused on producing reggae inflected versions of classic material … his ‘Dub Side Of The Moon’ (a take on Pink Floyd’s ‘Dark Side Of The Moon’) was one the best selling reggae albums of the last decade and also voted the second best “covers album” of all time by Mojo magazine!

For this new album Michael journeys back to the soul and funk vibes of the late 70s/early 80s and to help him deliver he’s enlisted some top session players… and a raft of classy indie soul singers including Greg Vilfranc, Robbie Rossen , Honey Larochelle, Lisala Beatty, Sophia Ramos and Maya Azucena. Ms. Azucena takes lead vocal on the album’s first single, a soulful ballad ‘I Can’t Wait’. It’s a throwback to the early Whitney Houston sound when quality of song took precedence over histrionic vocals. The album’s other focus ballad is ‘Testify’. Featuring Honey Larochelle, this one’s a little more complex and lacks the immediacy of ‘I Can’t Wait’.

The album’s real highlights, though, are the more up-tempo affairs. ‘Stay’ is a real strong if sophisticated dancer and might have well made a better first single. Lead vocal is down to Lisala Beatty and she deliver in fine old school style… with the right support this could become a 2016 modern soul room classic. ‘Sure Thing’ (Ms Beatty again) is another decent, sedate foot tapper. ‘Fantasy Lover’ (Honey Larochelle up front again) and ‘Fix It Up’ (Maya Azucena) are pacier and in a sort of EWF style. ‘Facebook Friends’ (with Robbie Rosen on lead) is slinkier (in the fashion of Prince)… and what a great idea to use Facebook as the basis for a song story line.

On the debit side, one of the tracks tries to develop another unusual story line but ‘Shit Or Get Off The Pot’ doesn’t quite work out… with lyrics extolling the virtue of laxatives it was going to struggle wasn’t it? Sad really, ‘cos the tune’s a decent Philly femme disco thing but the lyrics are a turn off! The album’s other turn off is ‘Tonight’ on which Michael takes the lead vocal himself. After just a few seconds you realise why he’s enlisted so many other singers to help him out!

Take those two cuts out of the mix and you have a thoroughly decent modern soul/retro flavoured album and I’d urge you all to at least investigate ‘Stay’.