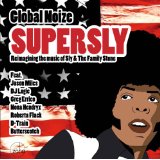 Global Noize is a session band that’s been put together by keyboardist/producer/arranger Jason Miles – best known, I guess, for his smooth jazz tribute albums to people like Marvin Gaye, Miles Davis and Grover Washington. Here – via the Global Noize ensemble – he turns his attention to the music of Sly And The Family Stone.

The most interesting member of Global Noize is Roberta Flack. Miles brings her in to sing on ‘It’s A Family Affair’ and, in truth it’s a rather odd affair. Ms F’s vocal is, as ever, cool and laid back but it seems to be ever battling against Jay Rodriguez’s weaving sax lines. The whole things lacks the attack and edge of the original and I’m sure Jason Miles thought so too, ‘cos he offers a remix of the cut later on … but despite Fabu Mumbia’s tweaking, it still come nowhere near the spirit of the original. And that’s really the problem with the album.

It must be hard for anyone not around in the late 60s to understand and appreciate the impact that Sly and The Family Stone had. Sly and his crew were a musical tsunami – overwhelming and aggressive – and even now the opening bars of ‘Dance To The Music’ grab you by the balls. But nothing in these Jason Miles’ reworkings grab you anywhere. People like Nona Hendryx, James D Train Williams, beat boxer Butterscotch and turntable scratcher DJ Logic try to bring some energy to proceedings but it doesn’t quite come off. Why, even Sly’s original drummer, Greg Errico, has a bash but he fails to enliven the tracks he features on – ‘In Time’, ‘Fun’, ‘You Can Make It If You Try’ and ‘Stand’. If you’re interested the other featured songs are ‘The Same Thing’, ‘Thank You For Taking Me To Africa’ and ‘Dreams’. Interestingly there’s no ‘Dance To The Music’. I guess Jason Miles knew that would be one just too, too difficult to emulate in any way.