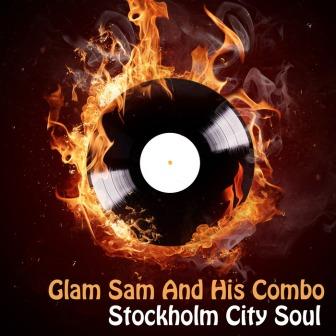 For a few years now, along with a few more knowing soul sites, we’ve been singing the praises of Glam Sam and his Combo. “Sam” is the alter ego of Swedish musician Mats Samuelson… a lover of all things soulful and funky. With some handpicked studio players, his “Combo”, Sam has been releasing quality retro soul since around 2009. His music skilfully melds soul with jazz, lounge music, funk and dance but for whatever reason, until quite recently, Glam Sam’s music has remained a comparative secret. The tune that changed that scenario was an uplifting dance item called ‘The Last Days Of Disco’ Originally released in 2010, the tune (as the name might imply) has become something of a staple on the soul dance scene and subsequently more and more people want to be in on the secret!

Now with the official release of ‘Stockholm City Soul’, the secret is definitely out. Wisely Sam/Mats builds the album around ‘Last Days Of Disco’ but instead of just using the same track, he’s had John Morales remix it and that name alone is enough to guarantee class and quality soul dance beats!

But ‘Last Days’ isn’t the only top tune on the ten tracker. ‘All Around Town’ is a slinky groove that kind of marries the sound of Guru’s ‘Jazzmatazz’ with Bobbi Humphreys’ flute! There’s more sedate Guru style rhyming on ‘Keep On Movin’ Through The Bullshit And Pain’ while ‘Fly B Boys And B Girls’ is Glam Sam’s homage to the Sugarhill Gang. For those modern soulsters who still can’t take rap, try ‘I’m The Dude Man’ which rides Sam’s reading of 80s weekender sounds.

‘Stockholm City Soul’ isn’t all retro though. ‘She Smiles’, with a semi spoken vocal from Karen Gibson, is what I suppose we’d called neo-soul or at least Glam Sam’s interpretation of it. And in essence that’s what’s going on here. Mr Sam – without the constraints that heritage puts on US soul producers or the serious demand for proper retro that many of the UK soul crowd crave – does his own thing. He takes traditional soul styles and puts his own un-fettered twist on ’em. And you know what? The music’s the more optimistic for it.