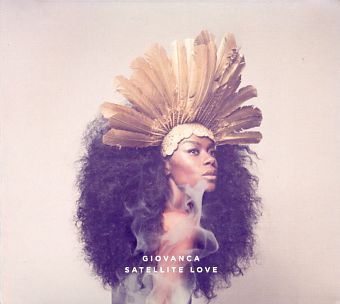 Working out of the Netherlands, Giovanca (Ostiana) enjoys a multi-faceted career. She’s an artist, model, actress, radio presenter and soul singer and it’s in that latter guise that she’s turning heads with this, her third solo album. Some of the heads being turned belong to the Jazz FM playlisters, who’ve’ made the LP their “Album Of The week”.

Citing her main influences as Dionne Warwick, Minnie Riperton, 80s pop and hip hop, she says that on ‘Satellite Love’ she set out to create a “cosmic vibe”! Well, a lot of the music is spacey and ethereal and the spirit of Minnie Riperton via Rotary Connection is ever present, though Erykah Badu looms large too (check out the art work). Other influences on the set? Well Labelle, the Pointer Sisters and even Lonnie Liston Smith play a part.

The short, oddly named intro, ‘Reginald & Desire’ sets the tone. “Rotary Connection for the 21st century” … and that particular vibe is continued on cuts like ‘Come Around’, ‘We Can’t’ and ‘Forgive My Soul’. The edgier and more eccentric ‘Look Of The Stars’ and ‘Bad Wishes’ bring an element of Badduism to proceedings while the energized ‘Lockdown’ recalls the best of the great Glitter Ball era. ‘No More’ is another great dancer. Much less frantic, it would interest the modern soul crew if they could just get past Giovanca’s off the wall vocal. The cut is remarkably infectious though. ‘Real’ is the album’s best ballad. Sincere and dramatic, it even has some of those pastoral Minnie Riperton sounds effects in the background. My vote for best track, though, goes to the least effected (or should that be “affected”) cut on the 14. ‘I Will Wait’ has no spaced out sounds; no birds cooing; no rain falling… nothing. Stripped down, with a simple guitar, muted trumpet and tinkling vibe as backing, it allows Giovanca to show us what she can do on her own. It’s quite lovely and you can find out more about the tune and the singer’s whole cosmology @ www.giovanca.com