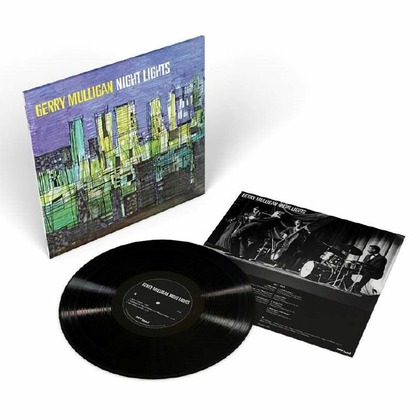 Gerry Mulligan‘s name is synonymous, of course, with the resonant, mellow-sounding baritone saxophone but on the opening title track of this long out-of-print album first issued by Verve in 1963, he sets aside his horn and sits at the piano. He doesn’t play anything remotely virtuosic, instead stating a haunting but relatively simple melody underpinned by shimmering minor chords before Art Farmer enters on flugelhorn and helps to create a mesmerising nocturnal ambience. He’s supported by gentle chords from Jim Hall’s guitar while Bill Crow’s ghostly bass notes and drummer Dave Bailey’s softly sibilant brushwork gently keep a faint but perceptible rhythmic pulse. Ironically, despite the absence of Mulligan’s trademark sax, it’s undoubtedly one of the New York musician’s greatest pieces.

For the remainder of the album, Mulligan reverts to a default setting, leaving the piano to blow his trusty horn. His tone is agile but soft and breathy on a sublime reading of ‘Morning Of The Carnival,’ Luis Bonfa’s classic tune from the 1959 Brazilian movie, Black Orpheus, which helped to launch the bossa nova sound. Mulligan also gives classical music composer Frederick Chopin’s ‘Prelude In E Minor’ a delicious bossa nova makeover.

Mulligan’s group – which also includes trombonist Bob Brookmeyer – gets to swing more freely on the self-penned ‘Festive Minor’ though the tune is typically west coast in style and attitude, exuding a sense of coolness and emotional detachment rather than the heat associated with the driving hard bop style favoured by jazz musicians from the US east coast.

The interplay between the musicians is particularly exquisite on the ballads; a cover of ‘Wee Small Hours’ (a song made famous by Frank Sinatra) and the self-penned ‘Tell Me When’ finds Mulligan caressing the main melodies of both tunes with a supremely nuanced sensitivity.

As a bonus track, the album closes with an alternate and more decorous version of ‘Night Lights,’  taken from a later LP, 1965’s ‘Feelin’ Good,’  which features a string section and finds Mulligan playing the main theme on clarinet.

Though Gerry Mulligan didn’t seek to break through the sound barrier like more groundbreaking saxophonists like John Coltrane and Ornette Coleman, with the under-appreciated ‘Night Lights,’ he created a record that deserves to be hailed as a classic. This new vinyl version sounds superb, thanks to impeccable remastering by Kevin Gray, the American sound engineer associated with the Blue Note label’s acclaimed Tone Poet series of audiophile vinyl reissues. The LP, which was pressed at the redoubtable Pallas plant in Germany – another sign of a high-quality release – also comes with an insert featuring liner notes by Bill Crow, who shares his memories of the session and working with Mulligan. A jazz reissue to savour.