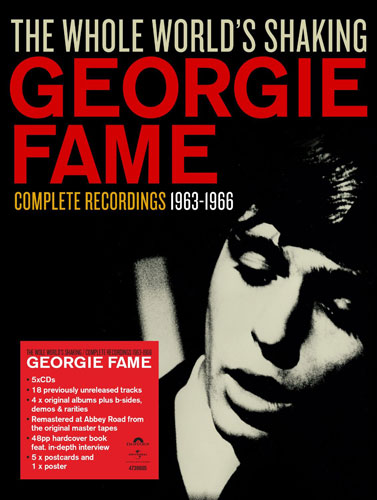 Right at the end of 1964 Georgie Fame and the Blue Flames topped the UK pop charts with their infectious cover of Mongo Santamaria/Jon Hendricks’ ‘Yeh Yeh’. It was released on the EMI subsidiary label, Columbia and now, a little over fifty years later, Universal (the custodian of the EMI vault) celebrate Georgie’s break through and his subsequent evolution to mod icon, British jazz legend and National Treasure by issuing this wonderful 5 CD box set that brings together all the recordings he made at Columbia/EMI between 1963 and 1966 – his breakthrough period. Essentially you get Georgie’s four Columba albums (each stuffed with contemporary extras – rarities and out takes) plus a fifth CD with 20 more of those rarities and out takes – many previously unreleased. It’s a monumental piece of work – befitting a major artist and there’s so much here that maybe the best way forward is to look at each CD in the set individually….

Rhythm And Blues At The Flamingo; This was Georgie’s first album and it was recorded live at Soho’s famed Flamingo Club – the 60s haunt of British mods, visiting US serviceman and music savvy West Indian immigrants. Georgie and his band had gravitated to the club after his rock n roll days had ended and with his Blue Flames he became the club’s resident. Playing almost every night and at the famous all nighters, his set evolved into a mix of mod soul, jazz and ska and the original 10 track album featured most of his club set… tunes like ‘Night Train’, ‘Work Song’, ‘Shop Around’ and the ska favourite ‘Humpty Dumpty’ . For this reissue there are 13 extras – tunes like Oscar Brown’s ‘Signifying Monkey’ that were omitted from the final Flamingo album and a selection that the Blue Flames recorded for the BBC.

Fame At Last; Released in 1964, Georgie’s first studio album was another reflection of his stage set and amongst the cuts there’s the lovely ‘Point Of No Return’ (which Georgie still plays at his live shows) a cover of Major Lance’s ‘The Monkey Time’ and the dreamy jazz standard ‘Moody’s Mood For Love’ . Amongst this CD’s bonus cuts are four tunes that formed Fame’s ‘Rhythm And Blue Beat’ EP and a certain ‘Yeh Yeh’ which was never an album track.

Sweet Things; Named for Georgie wonderful cover of the Spinners’ Motown song, this album was a particular favourite with British mods since its content veered more towards soul than any other. So alongside ‘Sweet Thing’ there’s Fame versions of stuff like ‘See Saw’, ‘Ride Your Pony’, ‘Sitting In The Park’ and a luscious cover of Joe Hinton’s version of Willie Nelson’s ‘Funny How Time Slips Away’. .. another oldie that Georgie retains in his current stage show. Amongst the added extras there’s the tracks that made up Georgie’s EP homage to Fats domino.

Sound Venture; 1965’s ‘sound Venture’ was Georgie’s most ambitious project… an album with a big band , led by arranger Harry South and made up of the cream of London’s jazz scene. We’re told that the jazz vets were a little wary about working with a young whipper snapper but as soon as Georgie opened up on thing like ‘Lil’ Pony’ and ‘Lil’ Darlin” ‘they soon changed their minds. Bizarre to think that this important British jazz album has been out of print for, so long!

Bend A Little; The box’s fifth CD contains 20 proper Fame rarities including a previously unreleased version of Barrett Strong’s ‘Money’ and a great cover of Earl Van Dyke’s ‘Soul Stomp’ (Georgie became friendly with the Motown man when he joined Motown’s 1965 UK tour.) The CD (and indeed the whole box) ends with a real oddity – a German language version of ‘Yeh Yeh’!

All five CDs comes beautifully packaged and the set comes complete with a 48 page hard back book that tells you most everything you need to know along with a couple of vintage posters. It is though the music that brings the appeal and if you really care about music – more specifically soul and jazz -this box set just has to be on your wish list!