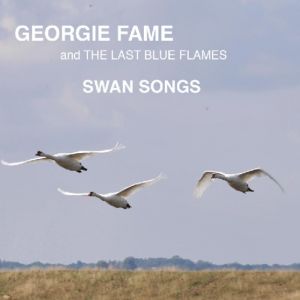 Dear old Georgie Fame has had a busy old year. Celebrating over 50 years in the music biz, he’s been constantly touring, had key releases from his back catalogue reissued, appeared in many high profile broadcasts and been interviewed and featured in/on almost every worthwhile music journal and/or web site (check out our interview archive for our interview with Georgie). Now the piece de résistance… a brand new album; sadly though, we’re told by the man himself, his very last hence, the title ‘Swan Songs’.

The album features 12 cuts and each one is presented with an alternative title that is meant to convey the mood of the song and, I’m guessing, give some insight into where Georgie’s at right now and also to show his influences and sources. So the set’s opener is a brief instrumental called ‘The Victory Hymn’. The alternative title is ‘The Methodist’… pointing to the non conformist chapels of his childhood – the places where he had his first proper music experiences.

Some of the other alternative titles are equally obvious in their intent. For instance ‘Mose Knows’ is flagged up as ‘The Catalyst’ …. and anyone who knows anything about Georgie’s influences will know that Mose Allison played a big part in helping to create the distinctive “George Fame sound”. Old man Mose is also referenced in ‘The Diary Blues’ – subtitled ‘The Diarist’ maybe because (like his old pal Bill Wyman) Georgie keeps a diary of his experiences?

Much more obvious is ‘De Caribbean Way’… homage to the role of ska in Georgie’s early days down at the Flamingo, while the album’s focus ballad is ‘Lost In A Lover’s Dream’ (a song that also featured on his last album; it was actually the title cut). It’s evident why its subtitle is ‘The Elegist’ and it’s a perfect summation of the art of George Fame.

The set’s outstanding cut though is the closer, ‘My Ship’ – one of only two non Fame songs on the album. This gentle meditation was written by one of Georgie’s old back-home pals, Mike O’Neill. O’Neill came down to London in the late 50s where he became Nero of “Nero and the Gladiators” and it was Mike who first brought Georgie down to the Flamingo. In later life he wrote some beautiful songs and ‘My Ship’ is one of the best. Subtitled ‘The Optimist’, Georgie offers it as his homage to Chicago soul, name checking en route people like Curtis Mayfield, Major Lance, Joe Hinton, Quincy Jones, Gene Ammons, Phil Upchurch, Billy Stewart et al. Helping Georgie on the chorus is the lovely Madeleine Bell and throughout the support of the Blue Flames (Guy Barker, trumpet; Alan Skidmore, sax; Anthony Kerr, vibes; Alec Dankworth, bass; Ralph Salmins, percussion and sons guitarist Tristan and drummer James) is just perfect. They totally understand the unique sound that Georgie wants and they deliver in spades.

‘Swan Songs’ is right up there with the best of Georgie Fame’s albums, though there’s a whiff of sadness about things… can this really be the great man’s last recording?