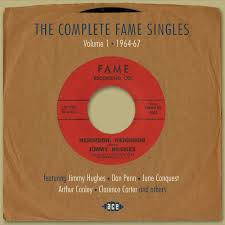 Though the wonderful Georgie Fame’s been in the business for over fifty years and recorded over 20 albums, he’s always looking for something new and different and on this new 12 tracker he’s crafted something very, very different (for him, that is!). Here, you see, Georgie takes a very low key, intimate approach – working with just two other musicians – guitarist Primoz Grasic and bass player Mario Mavrin and for the first time (I think) he leaves behind his beloved Hammond B-3. Grasic is a Slovenian and Mavrin hails from Croatia and Fame first came into contact with them when he played a jazz festival in what was then Yugoslavia in 1980. Through the 80s and 90s Georgie became a regular at the BP Jazz Club in Zagreb and on his last album he wrote a whole tune about the place. Logical, then to record with some of the players who perform there… and the Balkan twosome provide a wonderful backdrop for Fame’s unique vocal style.

Apart from that instantly recognizable voice, the other Fame constant on what we’ve said is a “different” album is the selection of material. Here, as ever, we get an enigmatic mix of jazz standards, pop covers and Fame originals. Of those originals ‘Blossom’ shines out. It’s Georgie’s rather late tribute to jazz vocalist Blossom Dearie (who in the 60s recorded her own tribute to Georgie) and on it our man shows his mastery of all things jazz, segueing into ‘Moody’s Mood For Love’ midway through. He lets his guitar man do something similar on his version of Andy Fairweather Low’s ‘Wide Eyed And Legless’ (a song he previously recorded on ‘Charlestons’). Right at the end Grasic breaks into ‘Do You Know The Way To San Jose’ … quite delightful.

Other Fame treats here include ‘I Can’t Get Started With You’ (complete with name checks to stars he’s worked with including Tony Bennett and Van Morrison), ‘Don’t Blame Me’ and the gentle self-penned title track. Like everything else on the album, all delivered with complete originality… testament to the fact that even with fifty years behind him, Georgie Fame still has genuine creativity foremost at the centre of his game.