GEORGIE FAME: Georgie Does His Thing With Strings … Plus (BGO) 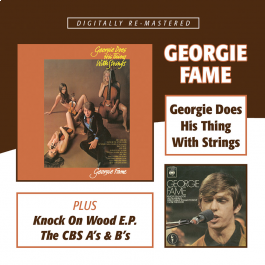 Dear old Georgie Fame is currently celebrating 50 years in the music biz and to tie in, different labels are reissuing lots of his archive material. Upcoming from Universal is a major box set, chronicling his early, break through days with EMI’s Columbia imprint. In the meantime Fame fans will be delighted with this lovely 2CD set from BGO Records.

The focal point of package is Georgie’s 1970 album ‘Georgie Does His Thing With Strings And Things’ which he recorded for CBS after disbanding the formidable Blue Flames. The long player sees Georgie at a career crossroads. He’d begun his music odyssey as a rock n roller but soon graduated to R&B, soul and jazz – he was also partial to a smattering of ska! Purveying that cocktail made the Leigh born musician a mod hero but to take him to the next level his people felt he could make the switch to a poppier, more middle of the road music and though Georgie was unhappy with the transition he went along with it.

‘Georgie Does His Thing With Strings’ is the principle manifestation of this career swerve. The 12 track LP was a collection of largely MOR tunes set in lush productions and arrangements courtesy of Mike Smith and Keith Mansfield. Amongst the songs are a pair of Bacharach/David classics (‘A House Is Not A Home’ and ‘This Guy’s In Love With You’, a version of the Beatles ‘And I Love Her’ and a look at Nancy Wilson’s ‘Guess Who I Saw Today’. The only nod to his past comes when Georgie tackles Little Willie John’s ‘Need Your Love So Bad’… but this version is a far cry from the rough-hewn original. Throughout you can almost hear the doubt in Georgie’s distinctive voice… should, I really be working in this style is what you can hear him thinking – a feeling echoed in his awkward front cover pose!

Apart from the 12 track album, this set offers lots of bonuses and generally they show Georgie in a better light – doing what he does best – jazz, soul and ballsier pop. First up there’s material from his ‘Knock On Wood’ EP and he does a great job of the Eddie Floyd chestnut while his stab at the Lovin’ Spoonful’s ‘Didn’t Want To Have To Do It’ is particularly sensitive.

Then there’s the A and B sides of the singles Fame issued at CBS and yes, stuff like ‘The Ballad Of Bonnie and Clyde’ are pure pop but ‘Bidin’ My Time’ is a great nod to the sound of Motown while ‘Beware Of The Dog’ is a classy Hammond-led soul–jazz workout. Georgie also offers great versions of the Friends of Distinction’s ‘Peaceful’ and Jimmy Webb’s ‘By The Time I Get To Phoenix’.

At 71 Georgie is still working hard – recording and touring. His shows are worth catching. Anecdote-laden, they’re like a soul and jazz history lesson and though he doesn’t feature any of these songs in the show (at least not to the best of my memory), this collection is still essential for Fame fans and casual collectors alike. And apart for the music they’ll also be treated to a great essay on Mr Fame from SJF’s very own Charles Waring.