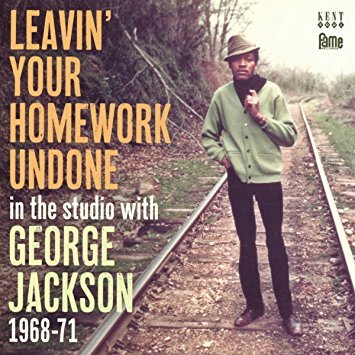 George Jackson is the archetypal Southern soul hero….revered by cognoscenti of the genre but practically anonymous to the mainstream. That George is little known is hardly surprising. In a lengthy career, working at labels like Goldwax, Fame, Sounds Of Memphis and Malaco, he only ever released one album and just 20 singles – none of which were hits. The chief reason for this is that the bosses of the labels he worked for saw George primarily as a writer. His followers will reel off a litany of singers who profited from the man’s songs but amongst his chief beneficiaries were Clarence Carter and Wilson Pickett.

Because of his reputation as a writer George Jackson was given unfettered access to the studio – to lay down demos of his latest creations and to occasionally work on his own output (meagre though it was). Over the years UK reissue specialists Ace/Kent have issued a plethora of George Jackson material – his released album and singles and also all kinds of other material – stuff that was meant to be released but never was and, of course, his demos.

‘Leavin’ Your Homework Undone’ is Ace/Kent’s fourth George Jackson collection and it offers 24 previously unissued cuts recorded at Fame studios between 1968 and 1971. In truth they’re all demos but some are so polished and “finished” that they could well have been released. Best examples are the pounding ‘If This Is Love’ and the forceful ‘I Got A Feeling’ – both right up there with the best of Fame. Southern soul fans will love both tunes.

Of the rest? Well those fans might recognize just four songs – ‘I’m Gonna Hold On To What I Got, which George re-recorded as the B –side to one of his singles; ‘Never In Public’ which Candi Staton cut; ‘A Man And a Half’ which Wilson Pickett recorded for his ‘Hey Jude’ album; and this album’s odd one out – ‘Your Love Made a U Turn’. This is the only song on the album that George didn’t write. It was penned by his buddy O B McClinton and went on to be recorded by both James Carr and Jimmy Hughes. No one can explain why George recorded it but it doesn’t sound odd or out of place with the other included 23 southern soul gems.