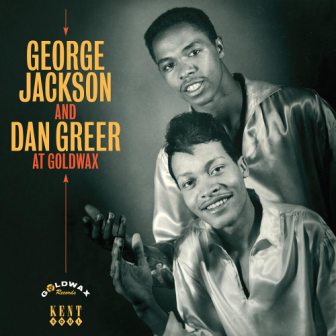 Over the years Ace/Kent have done sterling service for Southern soul collectors – scouring vaults and releasing countless albums that richly illustrate the stark beauty of the genre. The label’s latest offering in the field is a look at the collaborative efforts of two southern soul mainstays – George Jackson and Dan Greer. Both were busy writers and producers and for a time they worked as a team in and around Memphis. As a duo their first taste of success came when they penned ‘I Believe I’ll Go Back’ for The Ovations which was released on Goldwax. On the strength of that they were signed as writers to the Goldwax publishing arm, Rise Music.

As is sometimes the way with in-house writers, George and Dan ended up in front of the mic at Goldwax, releasing just one single – a busy, beating Sam and Dave pastiche called ‘You Didn’t Know It But You Had Me’ with Sam Cooke’s ‘God Times’ on the flip. A second single was prepared – ‘To Me It’s Storming’ b /w ‘Do The March’ but never released and those four sides start proceedings on this collection. Following on are 19 tracks recorded by the duo at Goldwax between 1966 and 1967. They’re all demos and it’s hard to tell whether it’s George or Dan on lead on each cut. Both voices were similar and the Ace people tell us that the recording logs offer few details. Hardly surprising since what we have are works in progress – some more polished than others. Pick of the bunch is a lovely ballad called ‘Don’t Wake Me Up’. It’ sweet but soulful and features some great harmonies. Elsewhere you can feel the hand of Sam Cooke while in other places you can hear who the duo were probably aiming the songs at – ‘Come And Make Up My Mind’ for instance would have been a great vehicle for Wilson Pickett.

We’re told that only two of the demos were sold on. They’re ‘Love Attack’ and ‘Coming Back To You Baby’ – both cut by James Carr and interesting to hear how the songs started off. There’s a good example of that progression within the 23 tracker itself. The album ends with the demo of ‘To Me It’s Storming’ – the first version of the song that was to be the duo’s second single. The finished, polished track (the one never released) is totally different and  quite wonderful. Basically, it’s Greer and Jackson’s take on the whole ‘My Girl’ thing and a great example of how, when they wanted to, the Southern studios could do Uptown too.