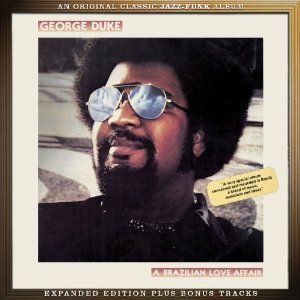 Sadly, ‘Dreamweaver’ is George Duke’s final album. As reported in our news pages, the master keyboardist died on August 5th. ‘Dreamweaver’, therefore, stands as his final testament and in many ways the 15 tracker is a perfect summation of Duke’s art – offering all the flavours (along with the odd surprise) that he became famous for. The album also contains what is George’s most autobiographical recording – the Bob James musically-flavoured ‘Trippin”. The song touches on his formative years in the California Bay area and tells how he first heard people like Les McCann and Ray Charles and how closely he was influenced by Cannonball Adderley – he even uses the ‘Ball’s catch phrase, ‘Ahoom!’ .

‘Trippin” is one of the album’s surprises, though there’s nothing surprising about the blistering jazz, funk and fusion that’s scattered throughout the set – ‘Stones Of Orion’, ‘Ashtray’, ‘Jazzamtazz’, ‘Brown Sneakers’ and the epic 15 minute plus ‘Burnt Sausage Jam’ have all the ingredients you’d expect from the man – aided and abetted by some of his favourite sidemen… Stanley Clarke, Everette Harp and Michael Patches Stewart amongst them.

The soulful side of George Duke is represented here by the lovely duet with Rachelle Ferrell, ‘Missing You’; the sensual ‘Round The Way Girl; and the collaboration with the late Teena Marie that is ‘Ball & Chain’. The simmering ballad comes from sessions that Duke produced on Teena just before she died and it appears here with the blessings of the singer’s daughter Alia Rose. It’s one of the albums big set pieces. The other one is the widescreen, cast of thousands ‘Change The World’. The song is one of those ‘We Are The World’ kind of things and features input from people like Lalah Hathaway, Jeffrey Osborne, Lori Perry, Be Be Winans and Freddy Jackson. Without sounding too curmudgeonly and agreeing that the sentiment is wholly admirable, the track is a little hackneyed, predictable even. You can probably guess that it includes snatches of Martin Luther King’s speeches and features a cute kid right at the end… a pleasant tune though.

The album ends with another of those George Duke surprises… a cover of cowboy singer Roy Rogers’ ‘Happy Trails’. Duke recorded it as a tribute to his wife, Corine, who died during the album sessions. The track has added poignancy in that guitarist Jef Lee Johnson died suddenly after the recording. Now George Duke has passed too but on first release he insisted that ‘Dreamweaver’ was his most honest album in a long while. He said that the album reflected what his wife’s death had made him realize…. “Everything is in transition –from hot to cold, from life to death. I wanted to incorporate that kind of thing and include a lot of things that are part of my life”. With that context, ‘Dreamweaver’ is indeed a fitting testament.

In 2010 GEORGE DUKE gave an exclusive interview to SoulandJazzandFunk… and you can access it via our search box at the top right of this page.