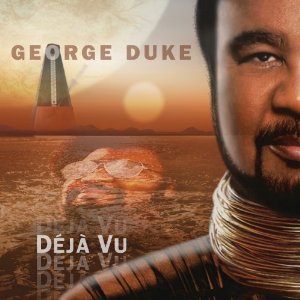 George Duke explains the title of this new album by asserting that “whatever happened before comes around again“. So – by extension – in this new music he’s either unconsciously being influenced by his past achievements and/or consciously replicating them. He even uses instruments that were his calling card back in the day – so expect lots of synths, Rhodes, Wurlitzers, clavinets and moogs. And you know, he’s succeeded in crafting an album with a real retro feel, stuffed with references to his past. The set kicks off with a lithe, little Latin shuffler , ‘A Melody’. It’s not quite another ‘Brazilian Love Affair’ but that clearly is the reference point; it’s even got some pleasing cooed, ensemble vocals from a team that includes the lovely Lynne Fiddmont. On the LP’s other vocal cuts George takes lead himself and he acquits himself rather well – even on the melodic, Wonder-esque ‘Bring Me Joy’. He’s much more down ‘n dirty on ‘You Touch My Brain’ while on ‘Come To Me Now’ he becomes a real old smoothie – almost as fluid as the lovely piano that embellishes the track. Of the instrumentals, ‘Stupid Is As Stupid Does’ is a brash ensemble workout with Hubert Laws (flute), Nicholas Payton (trumpet) and Bob Sheppard (tenor). Oscar Brashear handles the trumpet parts on Duke’s tribute to Mile Davis’s 70’s work, ‘Ripple In Time’ and it succeeds. Elsewhere ‘What Goes Around Comes Around’ features some thumping bass lines from Michael Manson while the title cut, which is the album’s closer, is a sombre builder. To discover more about this album and George Duke’s take on the whole jazz scene have a look at our exclusive interview with him. It’s – logically – in our “interviews” section.