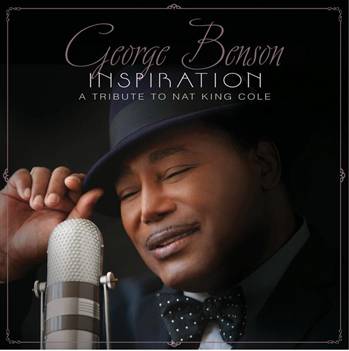 We’re told that George Benson has always harboured a passion for Nat King Cole … and if you think that’s record company PR hype to justify this new release ( Benson’s 13 track tribute to Cole) just grab a listen to the opening 58 seconds of the album. It features an 8 year old “Little” George Benson doing his best with Cole’s classic ‘Mona Lisa’. Yes, even as a nipper George had a tremendous respect and admiration for Nat King Cole and, don’t forget, once he’d hit the really big time his second post ‘Breezin” album featured a progressive version of the Cole standard ‘Nature Boy’.

Naturally ‘Nature Boy’ is included on this album. But for Benson it’s a “new” arrangement. Here – and indeed throughout the album – George and his arranger Randy Waldman have gone back to the original music charts that Nelson Riddle and Gordon Jenkins prepared for Cole. Supported by the Henry Mancini Institute Orchestra, the Benson versions of songs like ‘Just One Of These Things’, ‘Unforgettable’, ‘Walkin’ My Baby Back Home’, ‘Smile’ and ‘Straighten Up And Fly Right’ are ultra respectful but Benson manages to stamp his own mark on all the material . The album is peppered with Benson’s trademark guitar scat style (try ‘I’m Gonna Sit Right Down And Write Myself A Letter’) and though vocally the two singers’ timbres aren’t that far apart, occasionally we get glimpses of George’s dynamic top range.

The set also boasts two wonderful duets. On ‘When I Fall In Love’ Benson is joined by Broadway star Idina Menzel while on ‘Too Young’ the collaborator is rising musical star Judith Hill. Other guests include trumpeters Wynton Marsalis and Till Bronner . Together team Benson do more than achieve their goal. They wanted to bring back all the warmth and magic of Nat King Cole… yep, they’ve done that, but they’ve also managed to make the oh-so familiar fresh and vital again.