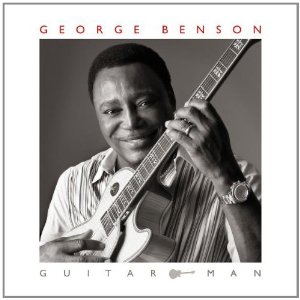 Though George Benson has enjoyed a spectacular career, it’s been chequered – and like many jazz artists who’ve enjoyed equal commercial success he’s had more than his fair share of “selling out” criticism levelled at him. With ten Grammys on the mantle piece and a banker-sized bank balance you’d think he wouldn’t be bothered, but reading between the lines (or should that be the tracks?) on this new album maybe he is. You see, ‘Guitar Man’ appears to be a return to his jazz roots. The aim of the album is clear. George just wants to feature his jazz guitar playing and to prove that he can still do it the way he used to…and he wastes no time – opening with a delightful solo treatment of ‘Tenderly’. Later on he offers another solo effort – his take on the evergreen ‘Danny Boy’. Here, it’s his virtuosity that’s highlighted… why, he even gets that famous white Ibanez to sound like bagpipes in places!

Elsewhere, George surrounds himself with great jazz players (Joe Sample, Harvey Mason and Freddie Washington amongst them) and together they deliver some great music. Yes, it veers towards the smooth end of the jazz spectrum … but smooth as it was back in the days of ‘Breezin”. A take on the Beatles’ ‘I Want To Hold Your Hand’ is delightfully languid – as are straight versions of ‘Don’t Know Why’ and ‘The Lady In My Life’. A look at the Champs’ 1958 hit ‘Tequila’ is about as energetic as it gets and George being George can’t resist flexing his vocals. He takes to the mic for renditions of ‘My Cherie Amour’, ‘My One And Only Love’ and ‘Since I Fell For You’ , while on Ronnie Foster’s ‘Fingerlero’ he shows that he’s lost none of his scatting expertise (great Sample piano here, by the way).

I’m not sure whether ‘Guitar Man’ will actually quieten the Benson critics. There’s maybe too much here that’s too smooth and/or commercial, but none of that means it’s any less a decent album and one that will satisfy the Benson fans who’ve grown and extended their sensitivities with him.