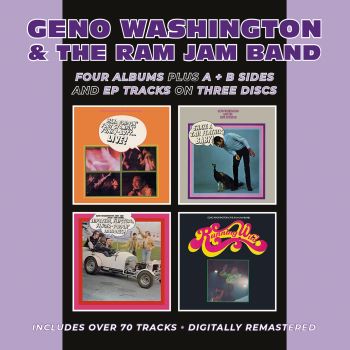 Last month BGO Records released a wonderful retrospective on Jimmy James and the Vagabonds – one of a slew of UK-based bands that in the 60s peddled their take on American soul to the soul starved British public. You see, unlike these “music everywhere and so easy to get” days, in the early/mid 60s, real soul was a rare commodity in the UK. Hardly ever heard on radio, not too many US soul sides were released in the UK while visits from US soul stars were sporadic at best. So, Jimmy and his band along with people like Georgie Fame and the Blue Flames, Zoot Money’s Big Roll Band, Chris Farlowe and the Thunderbirds, the Mike Cotton Sound, the Almost Blues, the Fix, Herbie Goins and the Nightimers and Cliff Bennett and the Rebel Rousers offered the next best thing – their take on the genre. Then of course there was Geno Washington and the Ram Jam Band – arguably the most celebrated of the UK based soul bands if only for Dexy and the Midnight Runners’ tribute to them. Find out everything you need to know about Geno Washington and his band via this new 2 CD, 56 track retrospective of his 60s output (albums and singles) when he was pacted to Pye/Piccadilly.

Washington was born William Francis Washington in Indiana in 1943. Nicknmaed Geno, after an American football star, he came to the UK with the US military and on his weekends off he immersed himself in the London music club scene. On one club night he hooked up with English guitarist Pete Gage, leader of the Ram Jam Band and Gage saw Washington as a potential front man and when Geno was demobbed that’s exactly the job he got! So, Geno Washington and the Ram Jam Band were born, and they soon became a hot live draw on the club circuit and the inevitable record deal soon followed. The band cut plenty of singles and four LPs – ‘Hand Clappin’, Foot Stompin’, Funky Butt…Live!’, ‘Shake A Tail Feather Baby’, ‘Hipsters, Flipsters, Finger-Poppin’ Daddies’ and ‘Running Wild’. Three of the four albums were billed as “live” sets in an attempt to cash in on the band’s reputation as an electrifying live attraction but in reality, only ‘Running Wild’ was truly “live” – recorded at Bolton’s Casino Club. ‘Hand Clappin’ and ‘Hipsters Flipsters’ were studio recordings given a live feel via audience reaction and a warmup MC. That’s of little import really. All four albums are wild and frantic – indeed much more “live” than many properly live recordings. The Ram Jam Band’s repertoire was drawn largely from the back catalogues of Stax and Atlantic so here you can enjoy their takes on stuff like ‘Hold On I’m Comin’’, ‘Knock On Wood’ and ‘In The Midnight Hour’ alongside cuts from other soul sources – including Motown.

Whatever he tackled Geno overdosed on enthusiasm. Where Georgie Fame oozed cool and Jimmy James offered sophistication, Geno was all excitement and brio and those qualities guaranteed that if his name was on a club poster, the place would sell out. Remarkable, and indeed this collection offers a remarkable snapshot of the UK soul scene in the 60s. The sleeve notes from SJF’s Charles Waring give you all the facts and details with precision and insight and the album is out now.