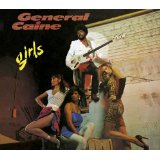 Cult funk and soul outfit, General Caine, were the brainchild of Mitch McDowell, a Californian multi-instrumentalist whose band was inspired by the zany Mothership funk of George Clinton’s Parliament-Funkadelic aggregation. This long forgotten platter was the group’s third LP (they had previously issued a brace of albums for Groove Time, a California-based indie label) and is revived as part of Demon Records’ extensive Tabu reissue programme.

For those that like their funk delivered with a manic energy, then this album will have loads of appeal. Several musicians associated with George Clinton augment McDowell’s six-piece band; they include Parlet singer Jean Washington and funky horn men Maceo Parker, Fred Wesley, and Richard ‘Kush’ Griffith. They certainly inject an authentic P-Funk vibe into the proceedings, which commences with the wild party groove, ‘Girls.’ The funk deepens on ‘Knock Down The Walls,’ a track that takes it stylistic cue for Parliament’s ‘Tear The Roof Off The Sucker’ and includes boisterous solos from Parker and Wesley. General Caine also know how to slow things down, as the sensuous bedroom ballad, ‘For Lover’s Only,’ cogently demonstrates. But the group’s undoubted forte is laying down slabs of greasy funk and tracks such as the Zapp-like ‘Don’t Stop’ with its driving synth bass and the slightly eccentric curio, ‘Baseball,’ won’t disappoint diehard funk aficionados (a single edit of the track appears as the set’s only bonus cut). General Caine went on to record one more album for Tabu – 1983’s ‘Dangerous,’ which is also due for reissue soon – before moving on to pastures new. For collectors of rare funk, this 1982 album is an essential purchase.