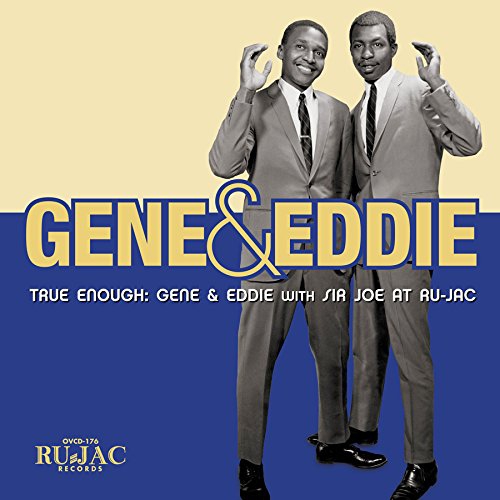 US reissue label Omnivore’s latest release looks at the work of Washington soul duo Gene (Dorsett) and Eddie (Best) but just to add a little confusion to the mix, the long player also includes four tracks from Sir Joe (Quarterman). The link is that Joe –an artist in his own right, of course – wrote and produced many of the Gene and Eddie cuts when all three were pacted with Baltimore label, Ru-Jac.

Complicated? Well, yes – a little, and sadly the rambling and lengthy sleeve notes don’t make things much clearer. Penned by Kevin Coombe, they are ultra thorough and would satisfy even the most extreme music anorak. So let’s try and pick our way through who was who and who worked with whom.

Gene and Eddie first came together in a mixed race show band called The Nightcaps. Their first recording was the self-financed ‘It’s So Hard’ which was released in 1965 on Best’s own Tonjo label – in which Joe Quarterman seemed to have a share. Quarterman, by the way, was dubbed “Sir” because for a time he fronted a band called The Knights, though he also had involvement with the El Corols Band and the Maidens and indeed with some of the other Maidens he went off to work with Garnett Mimms but just to add to the confusion he dubbed this new outfit, The Magnificent Seven. Cutting to the chase, Sir Joe quit his gig with Mimms and, back in DC, he and Eddie Best decided to place their Tonjo recordings with Baltimore label, Ru-Jac and that label’s boss, Rufus Mitchell, was so impressed that he promptly signed Gene and Eddie and Sir Joe and the trio thought they were on the way. However Ru-Jac lacked a studio and their artists had to sort that small matter themselves. Gene and Eddie and Quarterman, therefore, travelled to places like Virtue in Philadelphia or Edgewood in DC to cut new material for Ru-Jac, though part of the deal was that Ru-Jac would also own and release their Tonjo cuts. Hopes were naturally high, though, despite regular releases, success ultimately eluded the trio. Gene and Eddie walked away from Ru-Jac in 1971. Gene returned to his original trade as an electrician; Eddie tried his hand at production but quit the business in 1981; Sir Joe went on to form Sir Joe Quarterman and Free Soul (remember their ‘I’ve Got So Much Trouble In Mind’?) and recorded for labels like GSF and Mercury before moving into the architecture business.

Told you it was complicated; thankfully the music they crafted is much simpler. Gene and Eddie created typical, muscular 60s soul.. . a mix of ballads and big up-tempo numbers. Like many of their contemporaries they aped the big names, so the searing ‘Let Me Go Easy’ owes a lot to Otis Redding’s ‘I’ve Been Loving You Too Long’ while the dance slanted items take much from duos like Sam and Dave. Best offerings are the melodic, light ‘It’s No Sin’ and the sweet ballad ‘You Got To Love Me Sometimes ‘ (if you like the Knight Brothers, you’ll love this).

Of the four Sir Joe cuts, three come on like Northern obscurities though none are particularly memorable while ‘Baby I’ll Drop Everything’ is a meandering ballad.

Easy to hear why none of these recordings enjoyed any real success, but collectors will be delighted to have them easily accessible.